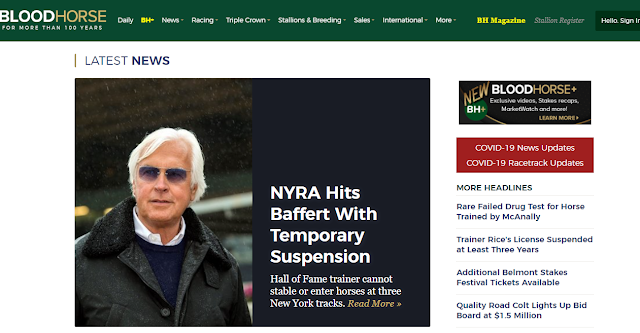 In addition to Medina Spirit coming in third at The Preakness (which is historically where he usually placed in prior grade A-1 stakes races), no Belmont entry at all for Baffert or Baffert-trained horses at the third jewel in the Triple Crown, The Belmont, nor at Saratoga, nor at Aqueduct (though the suspension time has not yet been determined, so later-summer Saratoga A-1 stakes could still be on the table).

And yet still, New York's not playing ... they said enough is enough with Baffert's horse drugging and cheating.

And you can kiss our liberal-Democrat, blue-bleeding hearts in Kentucky, too, A-hole! (However few of us there may be, here, lol.)

And like I said, though I'm not a big fan of "cancel culture" entirely (more cultural closet cleaning), if "Cancel Culture" also means no illegal horse-drugging by a selfish, corrupt, greedy, overprivileged, falsely-entitled A-hole who bribes, then sign us up!

Plus, more important than us "bleeding-heart liberals," it seems Bob Baffert has pissed off many casinos, as well as both legal and illegal bookies and numbers runners, "forgetting" to include them in his good-ole-boy, kickback-network system, by neglecting to inform them that he drugged his horses.
Hey, you think we liberals and cancel culture are bad, Baffert?
Forget about us - and it's a good thing you can't show your face in New York, right now,  for your own protection - because there are apparently some bookies there that would be more than happy to supply you with a nice pair of concrete shoes and help you "sleep wit' da fishes" in the East River lol.
Because as much as NYC organized crime loves Trump, they love their business and money even more - and I'm pretty sure you're not going to be able to count on their help, this time, no matter what Trump blurts lol


Because now 'ya done pissed off NYC organized crime syndicates - and anyone who's the sort of person into cheating/racketeering in horse racing already knows they have to include casinos and/or organized crime in racket and the cut.


Otherwise, it's like ... counting cards in Las Vegas casinos, for the last 10 years, asking them to turn the other way, without giving them a return on their allowance of that - bad things happen, if you do, and you'd be lucky to leave town with your life lol.


So in other words, not only did you get too big for your britches, but also  - you're an idiot.

Yes, I admit it, I'm enjoying this immensely, if you've read any of the few prior posts I've written on Baffert - particular note the one written on Derby Day, before the race ;)
Not just on behalf of the horses, jockeys, and other trainers we've gotten to know, but I admit, it gives me some satisfaction personally - because I was saying he was a snake since the day I met him (see that story in posts below), way back when he was made a hero and people (not in the business) were pooh-poohing me for saying it.
In fact, other than the outcome of the George Floyd trial, this is the second thing in 2021 that gives me hope that the truth can finally come out and justice can prevail, even if it's years later - all of the gaslighters of the world can't prevent truth and equal justice forever :)
You can read more about it HERE, from Bloodhorse.com