Okay, not a real baby, or even a new pet, but our new car - not brand new -  we never buy a car less than a year old because of depreciation and time needed for road evaluation/observation - but it's a 2017 Nissan Rogue Sport SL. 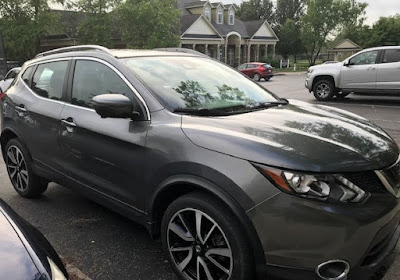 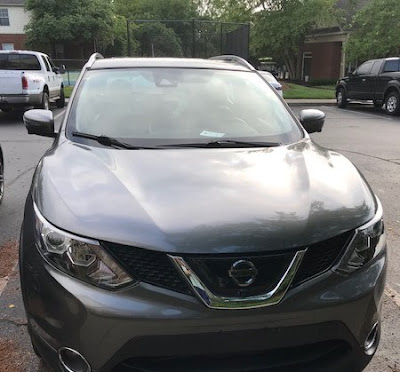 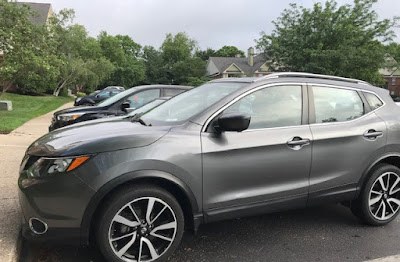 So before our vacay, we decided it was time for a trade-in for the trip - well, Mark decided that -  because I loved the Murano (see below) lol - but he's right, it was time before we go gallivanting over the mountains and all over God's green earth, in a few weeks.

Yes, we know - Nissan has slipped a bit in rankings, and that the 2017 Rogue Sport isn't as highly ranked, but it gets great owner reviews and can still kick it in the snow.

We weren't crazy about the new body style of the new Murano, plus have a couple of other things we we wanted to put our money towards in the next two years, other than a car, so the 2017 Rogue Sport works for us and our budget, right now :)

She's not a V6 and doesn't have as high of a clearance like the Murano (we like to sit up higher than traffic lol), nor does she have a moon roof - BUT - she's a cute little car that has a basic sunroof, AWD, GPS, a rear camera and object and blind-spot detection, a comfortable, a sunroof, roomy interior which will carry around all our horse and travel stuff -  and she's actually better in snow than the Murano, she kicks it! :) 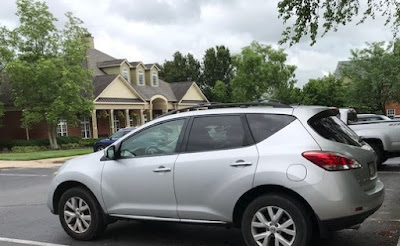 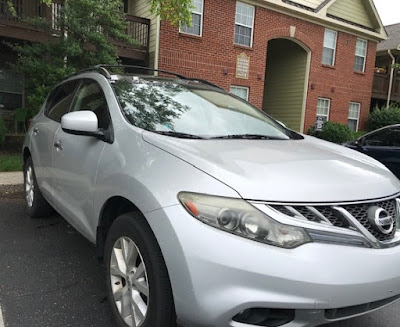 I've never really cared about cars much, but like I said, I loved that car - it had more rounded edges than cars, right now, which have become so angular and boxy again, and it had both a sun and moon roof :)

More importantly, the sentimental value - we got married in that car.  Okay, well not IN the car, but it carried us to St. Simons Island and the Smoky mountains in 2016 for our marriage/honeymoon lol :)

And she was stolen once, and we miraculously got her back, with the help of Mark's friend, Lexington Police Chief, Lawrence Weathers :)

And we often called it the "Pugarano" not only from toting Snuggy Pug (and Brookie) around in it (we put the word pug in everything, try it, it's fun - "Pug morning to you!"  lol).

Which brings me to, on a sad note, that is where Snuggy Pug took his final breaths, literally passing away in my arms on the way to the vet hospital :(

So yes, I admit it, I teared up like an idiot, for a minute, when we handed it over - isn't that stupid? lol

I mean, not true crying, but just a momentary tear up, then it was gone :)

It's weird the memories we associate with stuff - and you would think with all of losses I've had, I wouldn't!?!

Well, true, I DO accept loss and change much more quickly than most people - because I've had to.  You can't both wallow and work!

Therapy helps keep you in balance, though - no wallowing, but no bottling up either - so now just a quick minute of sentimental tear up over good memories, then looking forward to making new memories :)

New memories such as - I can't WAIT until our trip to the mountains - coming soon!