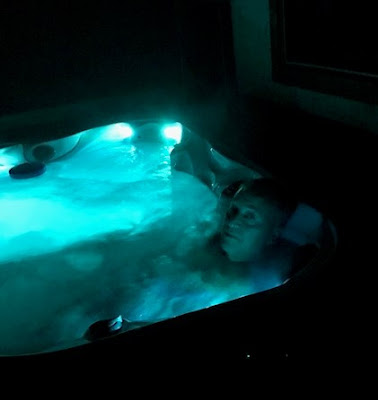 In this next photo, though it's a little hard to make out, the little blurry lights in the dark, behind the glasses, are actually lightning bugs or fireflies :)

(It depends on where you're from as to what you call them - in the North, like Detroit, where Mark is from, they call them fireflies - down South, we call them lightning bugs :) 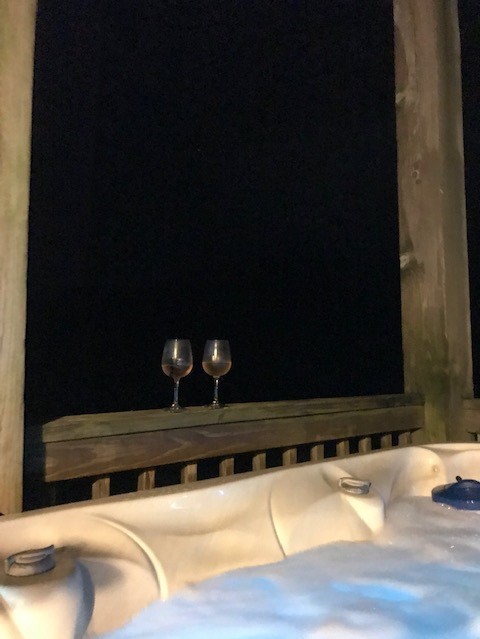 We'd tried repeatedly to get them on both camera and video, but they were never picked up until this  hot-tub photo, when we weren't even trying - just a couple of the closer ones.  Each night, they give us a full light show, here - it looks like the trees are glittering, it's fantastic :)

Kathryn, the cabin owner, leaves a little instructional binder, and it had this cartoon in it ... 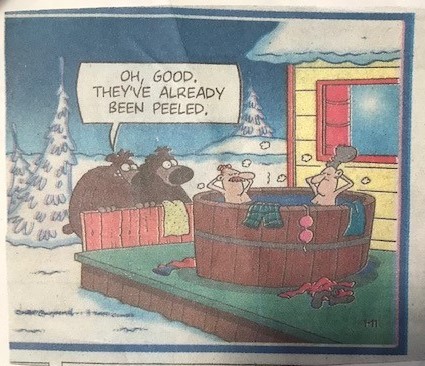 Actually,  no black-bear sightings yet, except these dancing ones, from a cute picture in the cabin ... 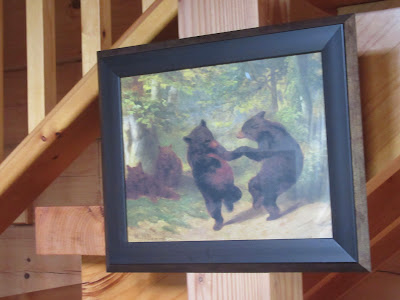 Nature sights and sound all around, wine, hot tub, and charcoal-grilled, locally-grown food and veggies, prepared by Chef Me - I think he's doing all right :)

In fact, when I was trying to book this vacation three months ago (which so many places were already booked up), he said, "Nothing beats the UP (Upper Penninsula, Michigan) or Traverse City on Lake Michigan.  "

I said, "Yeah, at three times the price."

Knowing we both agreed Gatlinburg had become too overcrowded and touristy, and despite so many placed already being booked by March, I found this place, on the quieter side of the Smokies, the East side, in North Carolina.

So this morning, out of the blue, he said, "Okay, I love it.  In fact, almost better than the UP, or at least a tie."

Ah, challenge met, mission accomplished - I should've made a bet! :)

More photos to come after we get home - these are just in the meantime, during morning rain :)

PS - As mentioned, I wanted to cancel due to Mark's father passing, but being as it was too late for a refund (as well as some family tension going on), Mark insisted we go,

As it turns out, Mark's stepmother has chosen cremation and to keep the urn with her, until her passing, with a memorial ceremony in the next two months.   I guess sometimes things work out the way they're supposed to, in the end - I guess.  And just sometimes :)