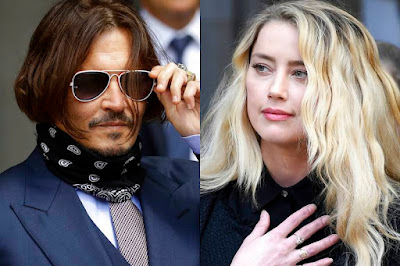 This is another one of those situations  that I wish would stop popping up in my "news" feed," and where you can tell there's a campaign going on, particularly for the Johnny Depp side, and has been for months.

Frankly, though I don't know all of the details, it appears to me that these two obviously brought out the worst in each other,  they're toxic together - neither one of them are "victims."

Both addicted to public adoration and attention, they clearly continue to try to publicly and legally punish and destroy  each other while we watch, sucking us all into things that frankly are none of our business, encouraging us to choose sides, out of nothing more than their need for large-scale public external validation, rather than just walking away/moving on .

At first, I felt sorry for Johnny Depp, because it was clear Amber lied, and it did appear the Pirates of the Caribbean series let him go as a result of it.

However, as more stuff came out, it was clear that both Johnny and Amber apparently became violent, that Johnny apparently did use heavy illegal drugs to the point of not knowing who or where he was at times, and that they both lied, manipulated, and threatened each other repeatedly.

In fact, the more anti-Amber stuff that was increasingly "suggested" by YouTube and popped up in my news feed, over the last year, the more I became suspicious that an anti-Amber social-media smear campaign was going on leading up the trial.

Thus, I became slightly more sympathetic towards Amber than  I was originally, but still not taking sides -  only because the subject of the lawsuit is Johnny claiming defamation - but then here's  Team Depp smearing Amber all over God's green earth for the past year.

HOWEVER - the legal definition of defamation isn't just proof of  a smear campaign and loss of reputation  - you must also prove lost income as a result -  and Depp did lose the POTC contract over Amber's claims of abuse.

Regardless, especially the past few months have been just like Chris Rock and Will Smith -  with one side clearly actively campaigning  through social media, trying to get us to choose sides - and if anything, that makes me more sympathetic to whomever it is they're  smearing.

But in the end, I think what I said above - there are no victims here - their dynamic is toxic, they're allergic to each other -  so stay away and move on, let it go?

Again, not everything is about you - and we do NOT have to choose sides.

Thus, please keep your beef with each other out of our faces - stop trying to suck us all into it to choose sides and  get down in the gutter with you, while you display your worst behavior, rather than your best,  just so we can continue to feed your need for public adoration, please?

I think ... in fact, I know ... there are good sides to them both, or they wouldn't have fallen in love - good sides that we've all seen before.  Nobody can hate this much without first loving someone very deeply.

So how about we see those best sides again, instead of your worst, please?