"The Eyes of Tammy Faye"

(*PS added about what became of Jim)

One of the things the - erm - Oscars incident  - overshadowed was the Oscars wins of others who attended the Academy Awards, which included Jessica Chastain's wins for Best Lead Actress for "The Eyes of Tammy Faye." 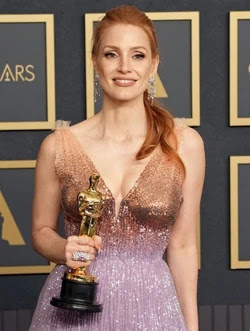 Thus, last night, we made an perhaps an odd movie choice for an Easter Sunday evening, but that ended up not being odd at all, once you've watched it - we watched "The Eyes of Tammy Faye." 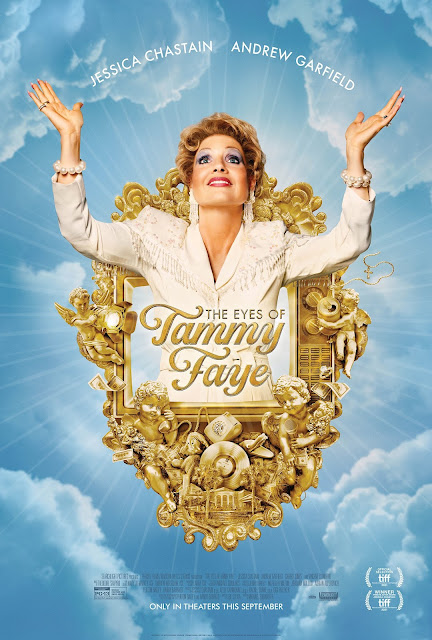 Now, first of all, you may recall that I grew up as a charismatic evangelical in the 80s, but as a teenager, I began to have severe doubts about faith, long before Jim Bakker went to prison for mail and wire-transfer fraud as hush money to (debatably) rape his secretary, or was accused of multiple homosexual encounters; or long before Jimmy Swaggart was found to have visited prostitutes multiple times.

As for I had begun to have my own doubts even before this, you can read prior posts, but at the time, Jim and Tammy Faye of PTL were THE deal in charismatic Christianity, topped only by Kenneth Copeland, the principle televangelist for our particular church, RHEMA Word of Faith ministries.

Personally, I found all of them a bit too shouty, but especially Jim and Tammy Faye were a little too OTT, ostentatious and cheesy, for my taste, from day one -  and the music, well ... sucked ... especially by teenager standards (Sorry, God and all?)

I felt that there was something between total self-denial and believing that God's blessings came in the form of wealth, that neither the Baptists nor the charismatics got right.

At the time, I was sure Jim Bakker was a closeted gay man, and I'm ashamed to say now that Tammy Faye Bakker was a joke to me, an OTT crying clown, who put on an insincere mascara-melting drama show every day, especially at a time when I became aware of just how fake and hypocritical this entire world was. 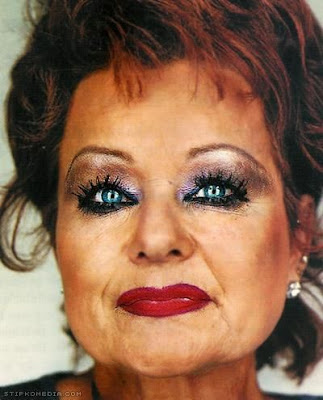 In fact, I really feel badly about that now, after watching this movie - because I never knew about the below 1985 interview in which she reached out to the LGBTQ community, despite the rest of Christian conservatives denouncing them and blaming them for the world's problems.   Thus, I never once heard of this 1985 interview.

In fact, the only thing I later heard about Tammy Faye was that many blamed her for her husband's choices - that she must've not performed her wifely duties or that she forced him to commit fraud in order to support her lavish lifestyle.

When in fact, the opposite was true.  She constantly felt she wasn't attractive enough for him because he rarely touched her, but she tried repeatedly - he just wasn't interested, and she blamed herself - thus the makeup, the plastic surgeries, the outfits - but none of it worked.

(And in fact, there is some evidence to support that the hotel tryst with Jessica Hahn was arranged to prove to himself, and his business partners, that he was not gay.)

These feelings left her to have a semi-affair, which she never actually consummated, but was somewhat physical.  She confessed this to her husband, Jim, ashamed - explaining that he never had time for her anymore, never touched her, but this man made her feel beautiful, but she knew that it was wrong and she made a mistake.

She again apologized and Jim apologized privately for not "performing his manly duties" - BUT - he also  insisted that she go on the air publicly on PTL, admit it and apologize to everyone (which he later used to blame his affair with Jessica Hahn on as well) as public punishment, though no one would've even known about it.

She didn't have to do that - no one would've ever known - but she did it - right out in front of God and everybody - with Jim never admitting he hadn't touched her in years publicly.

And despite the fact that Jim continued to still rarely touch her, despite his tryst with Jessica Hahn, despite all of the accusations of homosexual encounters of Jim and fraud, she remained faithful for the rest of their marriage, until they finally divorced in 1992, then she continued to visit him in prison and they remained friends until her death in 2007 from prior colon cancer in remission, which returned as lung cancer.

Tammy avoided prison because she didn't handle any of the accounting, she just spent it - and of course, Tammy had no idea about Jessica, or the hush money to Jessica.

Also, she, and her second husband, Roe (prior contractor for the Bakkers) testified that she was threatened by Jerry Falwell Sr. if she spoke up and he offered her hush money, too, which she refused (Falwell of course denied).

They also testified - and this movie suggests - that Jerry Falwell promised to financially support her after Jim's imprisonment, but instead, completely vilified her along with Jim and the rest of the public, and abandoned her, leaving her to fend for herself financially, now penniless and without job prospects.

All of those people she once genuinely and generously gave to, now abandoned her - and on top of that, blamed her for her husband's affair with Jessica and his fraud, despite her having no idea about Jessica, and the law not seeing things that way :(

Apparently, when Jim and Tammy started out, by all accounts, they were genuine.  In the beginning, all the money they raked in went to all kinds of community services for the poor, sick, widowed, unwed single mothers, etc.  But as they say, absolute power corrupts absolutely - and the money proved too much of a temptation for them both.

In researching all of this after the movie, I found that that though Tammy Faye cried a lot, and was so OTT the top, she actually meant every word she said in loving people, trying to convey the love of God to everyone - including the LGBTQ community.  It wasn't just show, she donated and contributed as much as the church would allow to HIV/AIDS research and to personally ministering to the LGBTQ community, making sure to touch, hug, and hold AIDS patients.

And in fact, the most disgusting thing was what Jerry Falwell Sr. did when he took over the ministry, the way he lied to and defrauded them to achieve control and abandoned Tammy Faye :(

We BOTH made a joke out of a woman who underneath all the crazy makeup and hair, underneath the OTT emotions, underneath the lavish lifestyle  - truly was a wonderful person with a heart of gold, who gave away more than she ever got :(

Yes, she spent the church's money and things she shouldn't - but she admitted doing so and repented - and unlike Jim, never even attempted to go back to televangelism.

In fact, she ended up renting an modest apartment, struggling, until she married Roe - so she paid for it - and yet she never lost her heart for helping others, too, wanting them to experience the love of Jesus, despite their circumstances.

I guess being originally from a charismatic environment myself, I understand the "God's going to provide" often delusion/in denial mindset of it all.

Money is no object, you see, they see it all as "God's provision, God's blessing," regardless of where it comes from or the methods - they just don't want to look at that, or anything, really, too closely - in a sort of denial.

Nevertheless, Tammy Faye continued to be invited to and participate in Gay Pride Parades, attend events, and give when she could to AIDS-HIV-related research, until her own death from cancer in 2007 - and she stated that the gay community rallied around her after her divorce from Jim - in fact, they were the only people who were kind to her.

(I had a similar experience after being rejected by the charismatic Christian community, or more aptly, after I began to reject them, began to question may things.)

Regardless, I just finished watching the original 1985 interview with Reverend Doctor Stephen Pieters, who remarkably is still alive, after contracting AIDS and Kaposi's sarcoma, and has nothing but positive things to say about Tammy Faye Bakker Messner still today.

I was blown away that this was 1985, and the only people openly embracing people with AIDs - especially gay men with AIDs - were Elizabeth Taylor and the show (which is still one of my favorite shows of all time) "Designing Women."

Her interview was very respectful, very insightful, asking questions she clearly already knew the answer to, having educated herself, but letting him answer for many Christian viewers who had these questions.

I was also blown away by the message of Rev. Pieters, what a wonderful person he was as well.

So without further ado, I give you "Tammy's House Party" on PTL with Tammy Faye Bakker Messner and Reverend Stephen Pieters in 1985 :)

I'm so sorry, Tammy - I'm sorry we judged you so harshly and laughed at you, and that we weren't there for you, as you had been for so many others :( 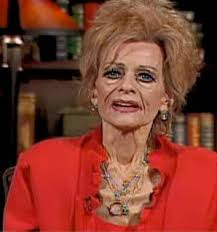 However, I'm glad the LGBTQ community was there for her, stepping up to the plate in our absence. 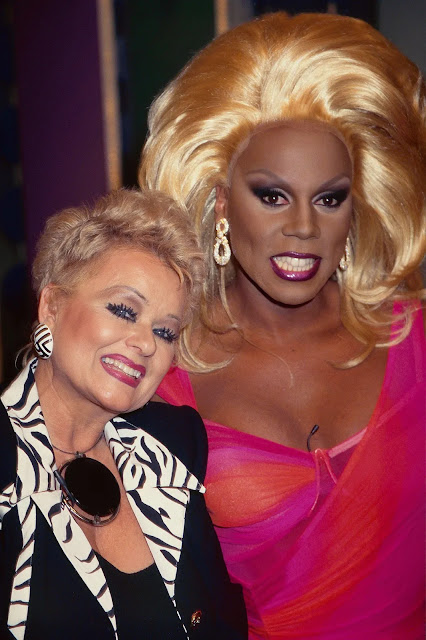 Tammy, I'm hoping you can look down and see the outpouring of love for you now, dear heart - xo :)

Jessica Chastain just won and Oscar for playing you on the big screen, how about that for not only being forgotten in shame, but for instead being remembered well and much beloved, in the end? :)

(She did a FANTASTIC job, by the way, dead-on impersonation, Minnesota accent and Betty Boop voice and all.)

As for Jim,  he was released from prison and went right back to his televangelist ways, with a revised PTL, on which he now hocks various "blessed" products to sell, including a 12-hour "cure" for COVID - and despite previously known for not adhering closely to the conservative right, it now full-blast right-wing extremist political  and anti-LGBTQ.

In fact, he recently held a 3-day pillow-selling marathon called "Take Back What the Devil Stole From You" with Mike Lindell to support restoring Trump to office and spread the hate for us "demonic" Democrats who "stole" the election lol ... 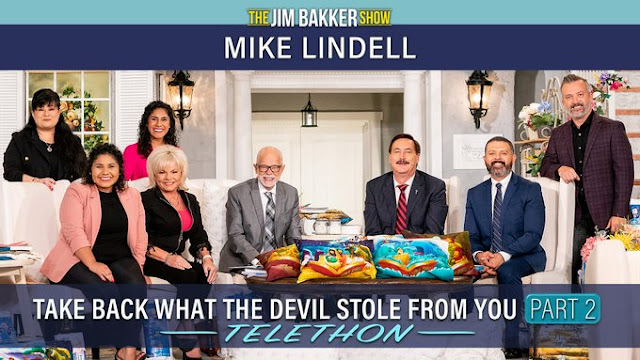 Well, snake-oil salesmen con artist do love to support one another :)