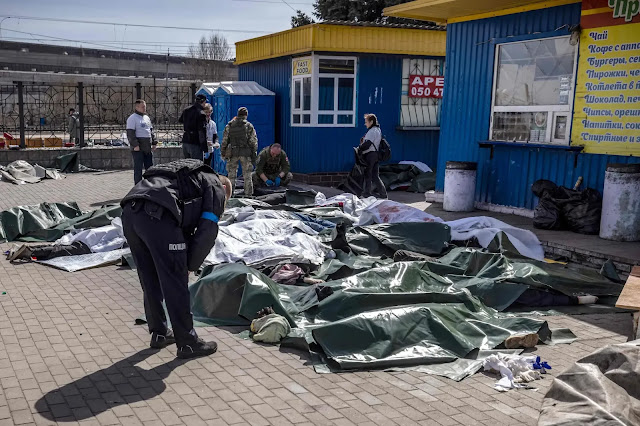 At the time this was written, 39 people confirmed dead thus far, after Russia bombed a train station in Kramatorsk, Ukraine.  Trains have been the main method for evacuees to leave the now war-torn country.

When I heard of this, I thought about my post yesterday based on the NYT article, mentioning Tucker Carlson asking America a few weeks ago to ask ourselves "Why we hate Putin so much, what has he done to us?" - using examples like "Has he called me a racist?" or "Sent my job to Russia?"

Clearly trying to not-so-subtly convince us that Putin isn't such a bad guy, using things which apparently Tucker thinks are the worse things that could ever happen to a person.

(Well, the dog-eating thing truly would be horrible, but was just a bizarre thing for him to say.)

I don't hate Putin -  I don't hate anyone - but yes, invading a small, independent country to reincorporate them into your own country against their will fits my definition of a bad guy, and is worse than most of the things on Tucker's list.

Because some of us still care about other people, as well as issues greater than ourselves, Tucker.

Now that Putin has ordered the bombing of a train station of unarmed, non-military, non-government evacuees, which included children - - which is tantamount to terrorism, as there is no political or military justification for doing something like that, under any circumstances - - yes, that pretty much cements Putin's picture as the poster-boy image next to the textbook definition of "bad guy" - sorry, Tucker.

I'm sure that Putinites/Trumpites will try to say Ukraine is lying, they did it themselves, trying to keep their citizens there to fight,  which is not only highly unlikely, but the typical battle cry of every bully, and there's too much evidence to the contrary the Ukraine is not doing this themselves.

Also, even if the biochemical warfare lab thing was true - which it's not - it wouldn't justify this train station bombing of unarmed, non-military, non-government men, women, and children, just trying to flee, now would it?

I fear this action may now put things on a more global scale - in fact, I suspect that's why Putin did it.

Now, those (average estimates are approximately 35%) of Congressional Republicans that have pushing for Biden for actual military intervention will go nuts.

Thus far, Biden has resisted -  not only because it's not our job to police the world (and in recent times, we haven't "won" any of those wars where we've intervened) -  but because remember, Putin has threatened if anyone interferes militarily there will be "consequences like we've never seen before" and unlike Iraq, we DO know, for a fact, that they do have nuclear WMD.

God help the Ukraine, God help us, from the madman that is Putin and still avoid war.