Trump Is Scheduled to Host a $75,000-a-Plate Fundraiser for Himself at the Kentucky Derby ... 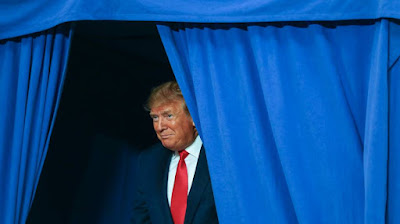 ... according to our local newspaper, the Lexington Herald Leader, and several other sources.

Welp, guess we'll be skipping even watching the Derby this year, because Lord knows, it'll be all about him instead of the horses.   The first president without a dog or a cat in the White House has openly said he's not fond of animals, so why is he there?

And you just know that if the horse he bets on doesn't win, he'll say it's rigged.

(Well, with horse-racing, that's actually a possibility - but he's the sort of guy who would make that happen.  I mean, he and Baffert are buddies, after all)

Regardless, a question to my husband today from a coworker ...

Coworker:  "You're a horse guy, what do you think about Trump coming to the derby?"

Mark:  "I don't know, he's supposedly not a big fan of  either animals or horse-racing, so I think it's just to get the people with big money who are, particularly the horse owners, to fund his "MAGA Again" campaign, because he's nearly broke from legal fees. Also, he apparently needs a new private jet lol."

"Hahaha!  Oh, you were serious.  So ... you have accepted the 2020 election result and don't believe it was stolen by us Democrats, then?"

Statistically with Trump supporters - especially here in Kentucky -  his answer would most likely be:   No - they have NOT accepted the 2020 election results and they DO believe the 2020 election was  was stolen.

"Thank you. I guess that means we were both upset about our losses then.    Except you didn't see us storming the Capitol Building, now did you? :) "

"No, actually I've hated the guy since the 80s, I've always thought he was a greedy, narcissistic con artist.  He has always represented the worst of America, rather than our best.  Anyone who would ever vote for someone like that clearly has something wrong with them" - and walked away lol.

However, I'm a little concerned that one could land him in HR because he made it personal, but we'll hope it doesn't - and that this person realizes they are the one that brought it up ;)