The Pro-Putin Wing of the Republican Party

An interesting article in New York Times today, about the split in the Republican party - not over Trump, but over Putin.

Liz Cheney has called that faction of the Republican Party "The Putin Wing of the GOP."

In January, a poll published by The Economist/YouGov revealed that Republicans had only a slightly less "very unfavorable "opinion of Putin (49%) than they did of Biden (43%), Harris (42%), and Pelosi (45%).

As an interesting related aside, something I noticed that the article didn't mention, was that of these same Republicans polled, 69% of them felt Putin was very dishonest ...

So ... only 49% of Republicans viewed Putin "very unfavorably" in January, but 69% of those same Republicans polled found him to be "very dishonest" in January.

Now, you would think that the percentages of finding  a person  "very unfavorable" and "very dishonest" would be near equal - but not according to a significant percentage of Republicans lol.

I realize we all unfortunately now consider dishonesty in politicians as almost an accepted practice - but this poll would appear to suggest that a significant percentage of Republicans don't find someone who is "very dishonest" as also being "very unfavorable."

I wonder if we could then extrapolate that being "very dishonest" might even be considered an added value to Republicans, just so long as they win? lol

Okay, that's a jump, because there could be variables/reasons for that outcome, so it would need further study to tease that out before extrapolating -  but it is odd that the percentages of "very dishonest" and "very unfavorable" aren't equal from the same respondents, isn't it - or am I looking at that wrong?

Well, it's not like we didn't already know that about the modern Republican Party - no level is too low to stoop to win, anything to win - falsely accusing/smear campaigning without legitimate proof, ruining careers and lives, just to win elections/gain power and wealth -  like it's a basketball game instead of people's lives and livelihoods.

Or they view politics like Republican, Ginni Thomas - wife of Republican/Conservative SCOTUS Justice, Clarence Thomas - and what said in her texts to Mark Meadows:

“The most important thing you can realize right now is that there are no rules in war. This war is psychological.  PSYOP.”

They imagine that they're in some sort of holy war/Christian Jihad with Democrats to "defend Christianity," so "all is fair in holy war" to them -  though there is no war, unless they create one (and they're trying awfully hard) lol.

As IF many of us Democrats aren't Christians, too?

It's just we like to be sensitive to/inclusive of other people's beliefs and needs, even if we disagree with those beliefs.

I hate to tell my fellow Christian brothers and sisters this, but I doubt that PSYOPS excuse will fly when we meet our maker.

I doubt he's going to buy that justification as easily as your political colleagues.

So what are you gonna say to our heavenly father then, fellow Christians?

"Well, I had to, we had to win the election, it was a holy war to defend Christianity."

Because there wasn't an actual war, there were Christians on both political sides, and you did have a choice about whether or not to create, repeat, or believe false accusations, despite not having proof, just to win elections  - PLUS - though you tried to justify it as defense, you know it was actually offense - done entirely for your own selfish gain/political power, ;)

Now, what is Putin's favorability now, after invading the Ukraine?

Last week, a new The Economist/YouGov poll revealed that although Biden, Harris, and Pelosi's unfavorability remains the same (or is slightly less), Putin's unfavorability has now risen to 65% among American Republicans, with 10% still viewing Putin as either somewhat or very favorable, and the remain 25% either being somewhat unfavorable or unsure. 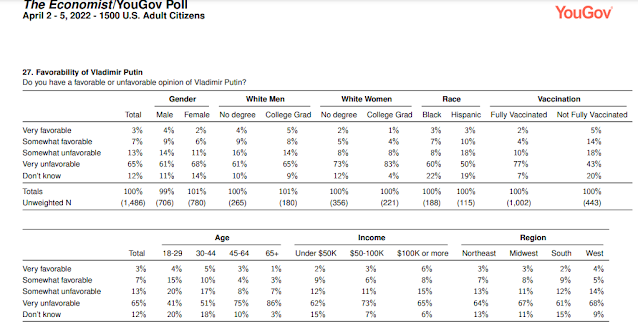 Well, it's good to know that they haven't drank every drop of the Trump-Putin-Tucker Carlson Kool-Aid, after all.

Now, you would think that with a dramatic change in opinion like that, American Republicans would begin to question their leaders and news sources on the credibility of information they've been receiving thus far from these sources -  but nope.

The NYT article today also points out that Tucker Carlson, like Trump, has particularly been a Putin fan  - but are we surprised?

This is the same guy who said in 2019:  "Why should I care about what's going on between the Ukraine and Russia?  And why shouldn't I take Russia's side, which I am,"

He later tried to walk it back and say he was joking, but it doesn't sound like it.  In fact, he sounds pretty upset.  Judge for yourself ...

Here's an excerpt from Tucker's Pro-Putin Fox News tirade two weeks ago- from Fox News's website, mind you, essentially stating that Washington has "programmed" us to hate Putin lol:

"Before that happens, it might be worth asking yourself, since it is getting pretty serious: What is this really about?  Why do I hate Putin so much? Has Putin ever called me a racist? Has he threatened to get me fired for disagreeing with him? Has he shipped every middle-class job in my town to Russia? Did he manufacture a worldwide pandemic that wrecked my business and kept me indoors for two years? Is he teaching my children to embrace racial discrimination? Is he making fentanyl? Is he trying to snuff out Christianity? Does he eat dogs?"

Now, let's examine Tucker's weak, third-grade arguments - erm - I mean, "self-examination" questions (cough, cough) ;)
"Has he (Putin) ever called me a racist?"
I don't know - but if you think someone calling you a racist is a valid reason to hate somebody and makes them a bad person, then it clearly doesn't take much for you to hate  -  so might they have a point?  lol.
(Also, hating someone because they called you a racist won't exactly help your case lol.)
If someone calls you a racist, then it might first be worth asking them why they think that and what they mean, self-examine and double-check yourself, before you automatically dismiss it, considering we are all products of inherent racial bias in this culture.
It's worth a conversation anyway, for better mutual understanding.
"Is he (Putin) trying to snuff out Christianity?"
No -  and neither is anyone in America.
Speaking of "manufacturing" things -  that's all you and the like, twisting us trying to be sensitive to, and inclusive of, other people's religious beliefs, in effort to be less egocentric and ethnocentric (and just display good manners) into "snuffing out Christianity"
But then being sensitive to other people's beliefs and good manners are clearly foreign concepts to you, so of course you'd consider them a threat.
And  lastly ...
"Does he (Putin) eat dogs?"
Does he WHAT?  Eat dogs?!?
What the ... ? lol
I ... don't even know what to say about that -  except that what kind of warped, cray-cray mind would even think of that? lol
Dude -  what are you even talking about, do you even know? lol
Now -  I realize that it's an attempt at both humor, as well as trying to not-so-subtly convince us that Putin isn't such a bad guy (and that anyone disagreeing with Putin is absurd and "government programmed") -  but instead, he ultimately made himself look absurd and Trump/Putin-government programmed lol.
And the fact is,  Tucker, it's not about how Putin's treated us - in fact, it isn't about us at all.
It's about Putin's superpower country invading a smaller independent country in effort to reincorporate them into their own country -  and yeah - doing so pretty much constitutes a bad guy.
Some of us care about about issues that are bigger than just ourselves,  just our own rights, and how people treat just us -  - I'm sorry that doesn't compute for you.
By Chrysalis at April 07, 2022