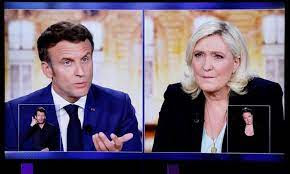 ... 58% to Macron and 41.8% for Le Pen -  which we hope is as true as it historically has been - because then the world can breathe at least a momentary sigh of relief - whew!

However, as many have said, this election has been not so much a vote FOR Macron, but more voting AGAINST Marine Le Pen and stave off far-right authoritarian control of France.

The vote was apparently closer between the two than in 2017, which is of some concern.

I understand the concerns with Macron - and yet I still can't believe  that anyone would vote for a woman who's father is unapologetically a Holocaust denier,  then took over the party herself without mention of her own stance and completely ignoring his -  who herself has openly supported Putin and admittedly taken loans from Russian banks for her political party -  and who wants to ban hijabs for women, imagining herself liberating women from Islam - apparently not realizing that no government should be dictating how women should dress or what faith they should ascribe to - that true liberation for women would be to allow women to wear whatever they want and believe in whatever faith they want.

But I especially can't believe that would ever be possible in France, or even this close :(
In fact, if Le Pen were to somehow get elected, were I a French citizen, I'd wear a hijab every day, I swear I would - not because I'm Muslim, I'm a devout Christian - but just to piss Le Pen et al off lol
Then I could proudly tell my grandchildren that the only time I was ever arrested was over something as stupid as wearing a head scarf , simply because the French government wasted taxpayer money to enact such a law, wrongly assuming that doing so automatically means that person is an evil, scary terrorist without any other proof than that ;)
And why are we targeting just Muslim women, anyway, hmm?
As IF Muslim women have much power or commit most terrorist actions anyway - hello?
In fact, according to true, actual Islamist extremists VS. normal Muslims, women are worth nothing more than breeding value.
It doesn't make any sense, any way you look at it, it's nonsense, it 's a waste of taxpayer money and parliament's time and solves nothing - just another way to scapegoat and blame your country's inherent problems on latest foreigners -  especially women -  only with a misogynist-enabling woman doing it!
(As IF we have any shortage of those types of women in society anyway, on both political sides actually, behaving as the Uncle Toms of feminism to get men to like them/gain power).

Thus, it appears that just like here in America, at least 41% of the people in France believe their own personal wealth - or the (often irrational) fear of someone taking their wealth - is more important to them than doing the right thing/the welfare of others - a message which, mind you, is in direct opposition to most of Christ's sermons -  despite posturing themselves as the "protectors of Christianity." :(
Also just like here in America, the far right tries to appeal the blue-collar set and convince them that they, in their patriarchal white wealth, know what's best for them, are on their side, and that they actually care about keeping their pennies safe in their little piggy bank VS. their own vast wealth in the banks of many nations, and that they alone care for them, by paying them in pennies and without  proper PPE during pandemics, because they don't actually exist and are merely a ploy to keep you from working/rely on the government and to get mind-controlling, monitoring vaccines lol.

(You would think that what I just wrote was an SNL parody, but this is what at least half of America - and what today's right-wing world - actually believes lol).

The reason this appeals to so many is because most of them didn't learn their actual lessons from WWII, or they didn't retain them, as I said two posts below, when writing about the history of Spain -- a history which the current political right ignores, because it doesn't fit well with their narrative of what a "Christian" authoritarian government would look like - it seems too many of us have forgotten most of the lessons we thought we learned from WWII and fascism :(

Because Nazism in WWII was not JUST about hatred/extermination for Jews, there were many other groups thrown under the bus -  plus the same  restrictions on personal freedoms in our private lives as is seen with communism -  with just as deadly consequences for disobedience.

However, for the moment, perhaps we can breathe a sigh of relief, I hope, if the exit poll numbers are correct?

(However, there's still the parliamentary vote in June, which much like our Congress, could limit the power of Macron's actions.)

However, as another positive -  just so as not to end the post on a negative note - at least we learned some lessons from WWI (and Korea, and Vietnam), which is not to jump in with both feet in conflicts between other countries that don't concern us without direct provocation or unless true genocide and/or world domination efforts are occurring.

And more good news - at least the recent 100+ hits per day on my blog from  France (which I'm assuming are Le Pen spam bots) might stop now? lol

Well, I'm assuming they're right-wing Le Pen spam bots, but I haven't had my comments open in years, so I don't actually know for sure.

However, they did follow the same multi-spam pattern as far-right Russian  and Russian-supporting Far-Eastern Ukraine spam bots have followed for the last decade or so, so it's a good guess ;)

However, in the unlikely event that even one of these actually has a human being behind it, let me make this very clear ...

Eff off, fascist far-right wing Le Pennonites and Putin sympathizers, peddling your disinformation wares - my comments are closed and have been for years due to chronic harassment by one individual - but as an added bonus, I don't have to wade through all your spam-a-lot political BS, every day lol.

Thus, you'll need to find another social medical forum to propel your propaganda.

Whew ... thank God, and I mean that.  If France ever goes far-right, we're doomed.