So ... I started watching this documentary, last week, but every time I saw the barely recognizable Val Kilmer, speaking through that voice box (time stamp 1:44), I teared up - just so tragic.

The loss of that rich, sonorous, sexy-fantastic voice - perfect for the voices of both Moses and God in "The Prince of Egypt," once playing Batman in Batman Forever, as well as Jim Morrison in the movie, "The Doors" - I just couldn't fathom.

In fact, it's his son, Jack - who sounds exactly like a young Val - who narrates most of the documentary, reading his dad's words for him, including in the clip above (when not showing actual clips of a pre-cancer Val).

For those who don't know, Val Kilmer was diagnosed with throat cancer in 2015 (which he denied until last year, not wanting pity), had chemotherapy, most of his vocal cords were removed, had 2 tracheostomies, and now needs a feeding tube to eat.

The documentary also includes several fun sneak-peak looks behind the scenes of most of the films and plays he was in, as he was one of the first people to get a video camera, and filmed everything in his life, nearly every day, like a video scrapbook :)

I finally finished the documentary tonight, and I'm so glad I did :)

Okay, yes - he's weird (like most actors are) - but I'm weird, and I like weird - and he can be intense, flaky, even obnoxiously childish, and difficult (or at least he used to be) -  but he can also be very sweet, very fun, very spiritual, brilliantly creative, loves hard, is fiercely loyal, and has not a bad word to say about anyone - so you can't help but love the guy :)

Though once known as quite the Casanova, in Hollywood, it's always men that have give him that "difficult" reputation, and he's also one of the few men in Hollywood to never be accused of mistreating women  - in fact, all the women in Hollywood that he worked with or dated still adore him, with former girlfriend, Cher, even letting him bunk in her guest house to recuperate from his throat surgery.

Of course, with the exception of his former wife,  Joanne Whalley, who says he abandoned her when filming, was terrible with money, and suspected him of cheating with Drew Barrymore, but that was never confirmed - and even she says, as far as she knows, he never cheated on her until that point and it was just the last year (and no one has accused him of cheating on Joanne).

I believe much of the problem is that Val - at the time, the youngest person ever accepted to The Juilliard School of Drama - is also method actor - meaning he throws himself into a role and literally becomes that person, day and night, for the entire film shoot, which can take months - and if the character is an asshole, so is Val.

I'm NOT saying that excuses it -  but she knew he was like that when she married him, too - and he admits the way he was -  but the method-actor thing was too hard on Joanne.

Not helping, I do think his fame went to his head, for a time while, and he admits he behaved badly at times, could be bizarre, but now is full of nothing but positivity and gratitude - if there ever was any Hollywood-induced narcissism, the throat cancer has completely knocked it all right out of him.

I can't help but feel like most of the time, however, in this documentary, he was mostly trying to entertain us and make us laugh, rather than get too vulnerable and show us the real Val, which I get - though diagnosed in 2015, he denied he had cancer until last year, because he didn't want pity, and you never want to get  too private in these things - and yet it makes me sad, that he still felt he had to entertain us and that just being himself wouldn't be okay with us :(

Also, lots of fellow actors and directors have expressed that he was never as difficult as he got the reputation for, to begin with, that he was undeserving of that reputation, when others were way worse, and that he often was simply misunderstood.

It was pretty clear from Val's home videos that Director John Frankenheimer was a total prick to everyone around him, on the set of The Island of Dr. Moreau, even to Marlon Brando (who Val got along very well with, which was not easy for anyone to do lol) - it was pretty clear that John would just prefer that no one ever speak to him at all and just do what they're told, like slaves.

I think, though, the most damaging hit to his reputation was director, Joel Schumacher, saying he'd never work with him again, when most people say Joel is easy to work with and the nicest director.

And yet there are those that are fiercely loyal to Val, saying he was very easy to work with - including producer, Jeffrey Katzenberg, director Tony Scott (who worked with him three times), and most of his fellow actors and actresses.

In fact, it seems to me the problem came in with the type of directors that are not fond of taking any input from their actors - they have a vision and that's the way it is, no ideas from the actors - period.

As nice as Joel Schumacher is, he's a visionary, he sees it all in his head before he ever starts filming, and he's apparently not a huge fan of that being tampered with, including any actor input on the character unless he asks for it.

Val Kilmer, however, started at Juilliard, on the stage, and stage actors have much more input on the characters, it's often welcome - and therein might've been the problem.

However, as I said, in movies, you do what the director/filmmaker tells you - period - you don't ever push back, you don't ever complain - which Val  did.   :/

The director and/or filmmaker orders you to stand and film in the freezing rain for 5 hours, despite he, himself, having two production assistants holding an umbrella over him, a heated blanket, unlimited coffee, and a portable heater?

The director and/or filmmaker tells you to jump repeatedly into a muddy pit of an unfinished backyard pool, filled with very real, dead-human cadavers - like JoBeth Williams had to do, when Steven Spielberg told her to, for Poltergeist? 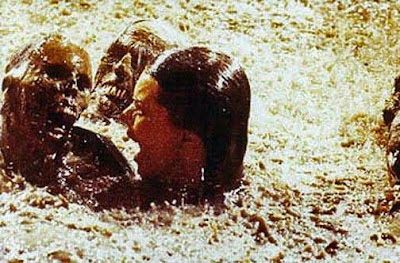 Or -  you never work in Hollywood again.

(In fact, this is the impetus for the "Poltergeist curse" theory, of why so many people related to this film have died.  I don't believe that, of course - but the real skeletons being used thing is 100% true)

JoBeth didn't reveal that publicly, until just few years ago, with both her and Steven saying it was for "added realism" and a "prank" - but the look in her eyes, when she says it, despite the smile on her face, says it all.

Because there had already been persistent rumors since the movie was made, that as well loved as the nice and generous Steven Spielberg supposedly is (who does typically take input from his actors, by the way), he also developed an unhealthy romantic obsession with Jobeth, at the time, nearly stalking her - though she had just married TV director, John Pasquin (whom she's still married to)  - so you gotta wonder - was it "added realism" and a "prank" or was it retaliation for rejecting Steven Spielberg's advances?

Jobeth will never tell, and she worked with him again regardless - but that's what you do, in Hollywood, if want to keep working :/

However, giving some further credence to that 40-year-old rumor was also the whole scene where she's in nothing but a football shirt to sleep in, when a spirit drags her from the bed and pins her up the wall, with her shirt repeatedly being yanked up, revealing her panties  -  including several inappropriate, odd, direct through-the-legs/crotch shots. 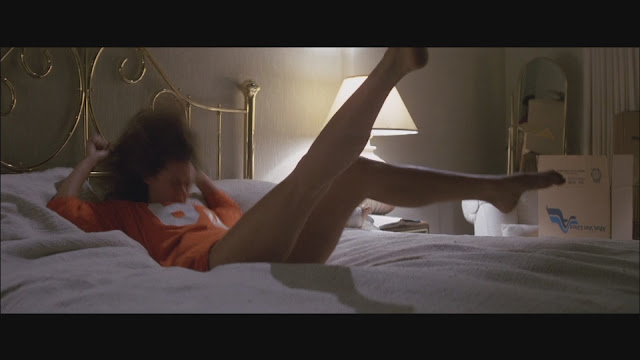 Of course, I'm not going to post the actual scene here - but we women already thought the scene was unnecessarily disturbing, went on way too long, had some very crass through-the-legs crotch shots, and was just oddly out of place with the rest of the theme and tone of the film.

But now, to our male readers (and clueless female ones) - after I've told you that 40-year-old rumor (if you hadn't already heard it) - when you see this movie again, see if you notice how many of those inappropriate through-the-legs crotch shots there actually were, in a near-spiritual-rape scene, how aggressively sexual the scene actually was, and how out of tone with the rest of the film it was  - which was especially odd from Steven Spielberg, who normally doesn't stoop like that, even with horror.

I guess we'll never know - because again, you never diss a director, no matter what they do - and if you talk about it, you put a positive spin on it, like Jobeth did.

Oh, but by the way - that shouldn't happen again, with actual human cadavers from medical schools, because there have been ethics and health laws implemented since.

However, it likely still could, because who's going to tell on the director?

As for unnecessary and inappropriately aggressive/forced sex scenes with women, where we make rape sexy, instead of actually just  being another method of power abuse?

And they can't complain to anyone about it privately, because they know most actors would kill for those roles, they're getting paid big money, and they don't want to appear ungrateful or diva-like or bite the hand that feeds them.

However, back to Val, as stated, most of his former fellow actors and actresses still adore Val.

In fact, before Tom Cruise signed on for the Top Gun sequel,  Top Gun: Maverick:  Top Gun (to be released next year), he insisted that he would NOT do this movie without Val :)

Well, they've found a way - a company called Sonantic has found a way to computer-generate Val's legendary voice, using old recordings, so that he can speak again :)

Interestingly, after what I said about God's blessings coming in the form of healing, rather than money or fame or power, two posts ago, Val mentions that very thing - how getting cancer and surviving it, learning to face the darkest parts of himself and heal, not just physically, but emotionally and spiritually, made him feel "blessed."

We still love you, Val - you're still "our Huckleberry" lol - welcome back, we missed you  :)