Armchair Warriors Playing a Virtual Board Game of "Risk" with Afghanistan ... 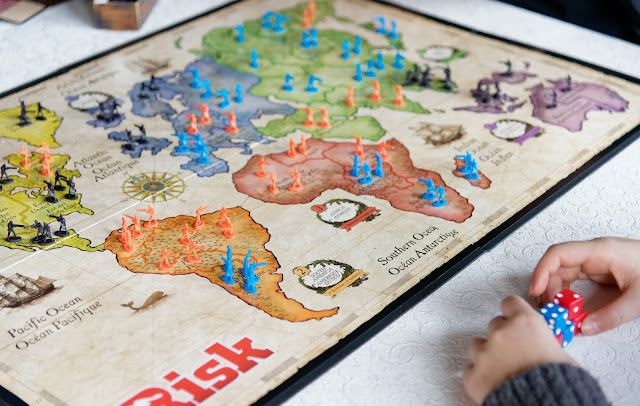 I wrote a post on my preliminary thoughts on Afghanistan, earlier this week (August 17th), just based on my personal opinion from what info we had thus far, which was heavily weighted by the opinion of my former-Army-Ranger husband.

IMO, opinions like his should count the most - because it's very easy for us non-military-experienced or non-government-experienced people, who don't have all the intel, to talk about what we think should be done, when we're not the ones risking our own lives, or the lives of our military, to do it ;)


Since then, the only thing that I will amend and concede (and my husband agrees) is that though I/we still agree with Biden on the pullout, it's become clear that expectations versus reality on how this would go were way off, leaving the Afghan people feeling completely abandoned, so it's true that aspect could've been anticipated better, and that perhaps this could've been done in a more regimented, incremental, organized, less messy (even horrific) fashion.
I don't have any answers as to how it should've been done, of course, but clearly, things didn't go as the powers-that-be anticipated :/

I've also since read what the other political side has to say, because that's what I do, in case there's something I missed or they make a valid point - which is rarer than ever, these days, considering most of their supposed "evidence" is literally taken from tabloids or a bunch of nobodies on social media, like themselves, whom they don't know from Adam and are no closer to the situation/have no more insight or inside information than anyone else :/

You know what struck me the most?


I find it interesting that the same people who've literally spent years trying to convince us ALL Muslims are our evil enemy, who can't be trusted, are suddenly sooooo concerned with the safety and welfare of non-Taliban Muslim citizens in Afghanistan and the "atrocities being committed."
So either they're finally conceding that not ALL Muslims are bad (without admitting it) - OR - it simply reveals even further how politically brainwashed they are, such that they're incapable of critically evaluating for contradictions, the political talking points they're taking in, before regurgitating them  ;)
This inability to critically evaluate information becomes especially apparent when these same people, who are now lamenting "atrocities being committed," sat completely silent and did not care, when pacifist Tibetan Buddhist monks were tortured and killed by the Chinese military, or with China taking over Hong Kong, arresting/beating any opposition or press - or when Crimea is invaded by Russia, or an opposition party leaders and press are poisoned with nerve agents.
Then again, we're not surprised, because we are talking about the same sort of people who provide self-contradicting arguments with COVID and hope you won't notice/remember, but that's a whole other post  -  long story short, the timeline of their non-clinically-based, self-contradictory arguments with COVID has gone like this ...
First there was no virus, it's all a hoax, Democrats are lying.
Then it was just a bad flu, and we're still lying, nobody should wear masks, it's "tyranny."
Then - without ever admitting the virus existed, mind you - they started stating as fact that hydroxychloroquine cures (the virus that doesn't exist?), without any clinical data as proof.
Then it was Remdesivir.
Now, it's Ivermectin.
LOL!


Gee - I wonder why non-gullible, smart people don't pay any attention to a word they say anymore, and just shake our heads in either sadness or laughter at them ;)
And of course, they neglect to mention not only there are no clinical trials proving any of these drugs effective, but also that the same politicians touting these drugs are "cures" are later found to have bought shares in these pharmaceutical companies, like Rand Paul did - or "Oh, his wife did, but he forgot to send in the paperwork" (LINK) ;)

God forbid the idea of a vaccine, just because the other political side and actual medical doctors/scientists say so, even though there IS no cure for ANY virus yet (with the exception of some people with Hepatitis C), so our best hope is a vaccine, with updated boosters for variants and evolutionary mutations.

Back to Afghanistan, then you have at least the more honest others, who focus less on pretending to have empathy for the Afghan people as Muslims, making it more about stamping out the Taliban - as IF that's an easy thing to do, like we're playing a giant board game of "Risk" with pawns instead of the lives of our young people in the military.

Granted, I have no military or government experience, and thus am unqualified - but I do know the value of once bitten, twice shy (or five or six times lol) - and thus I really think we should consider use of our military more carefully than we have for the past few decades, so as not to continue to make the same mistakes.


Meaning that IMO, the most probable motivation that we keep getting involved in conflicts in the Middle East versus conflicts involving China and Russia is NOT because of "atrocities being committed" - nor is it even about religion or the lack thereof.


It's about scratching the right backs for oil rights in the region, which has historically never turned out in our favor - as well as we already know in advance that a battle with China or Russia would end in a bloody, nuclear, expensive draw.


Thus, how many times times are we going to keep making the same mistake and falling for the manipulative political rhetoric of "atrocities being committed" and/or religion as being THE reasons to get involved in Middle East conflict versus atrocities that happen elsewhere, when this is actually about oil-field rights and always has been?