Hotspots VS. Vaccinated Regions: The Only Group Guilty of "Killing Our Country From Within" Is Ourselves, Refusing to Wear Masks Indoors and Vaccinate

Our school started this week, and we had 171 new cases in Fayette County and three new deaths - the highest total since February, prompting a new indoors mask order by Governor Beshear for all public K-12 schools, because the delta variant is now being contracted by younger children.

Then I went to look at the map of new cases versus vaccination rates around the country and around the world at the NYT. 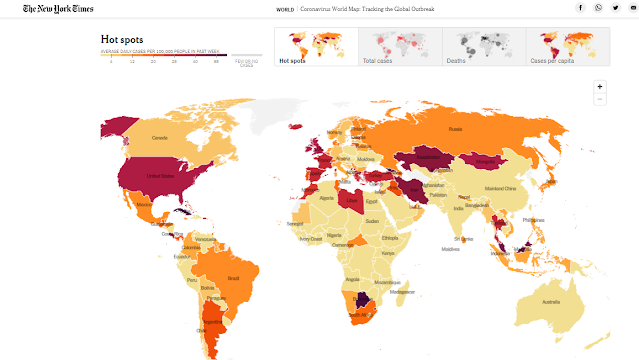 Note that the U.S. and the U.K. are in the top 10 countries in the world, for the most new cases in the world, this past week -  along with Kazahkstan, Iran, Mongolia, and Botswana!

Now, there is just no rational reason in the world, that two of the most developed countries in the world -  with the best healthcare systems and most highly-trained medical professionals -  have that many new cases - other than our two countries also now have the most irrational political beliefs in the world.

People, this conspiracy crap about the virus and the vaccine was started by politicians, trying to get you out to vote for them directly at the polls, as well as corporations trying to keep you as cheap, expendable labor for profit, instead of spending a few extra bucks for PPE to try and properly protect you.

The election is now over -  and if you haven't figured out by now all of that conspiracy stuff was political dysinformation to keep you at the polls, as well as cheap, unprotected labor - then I hate to say it, but unfortunately, you are either truly stupid or truly politically brainwashed, bordering on cult mentality, and I don't know what to tell you.

Now, I understand hesitancy with the vaccine, considering it came out so quickly, it's a risk/benefit decision for some people with health conditions - and as I've always said, the first vaccine isn't usually the best, especially with highly-evolved/quickly mutating viruses, which is why we get booster shots for the flu vaccine, every year (helllooo?) ...

... but it does appear to be working - when you compare areas with the most vaccinated populations VS. the new COVID counts - proving a direct correlation between states less vaccinated and amounts of new COVID cases and deaths ... 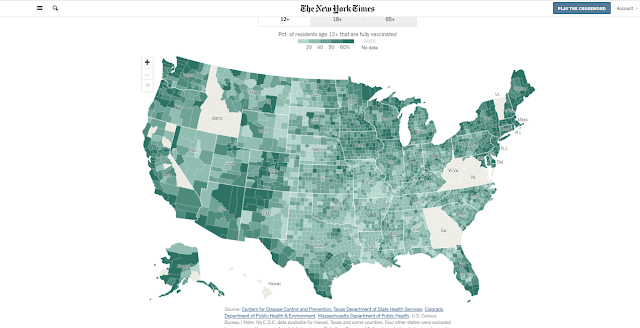 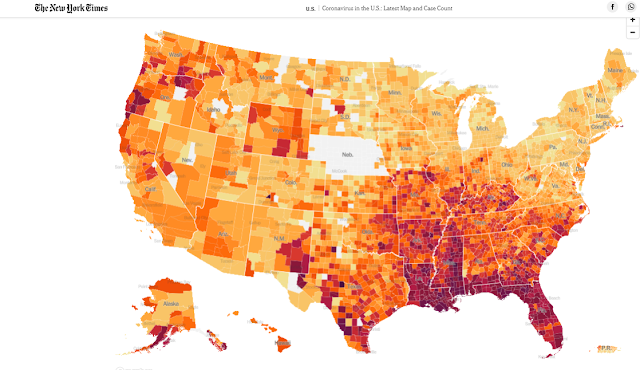 I mean, duh?  It's not hard to see the correlation.

It's also a direct correlation between the states with the highest amount of Trumpers versus others :/

Can you believe that even the overpopulated U.S. territory, Puerto Rico (not officially a state and without full U.S. benefits), is actually doing better than the continental U.S. and even Alaska, when it comes to vaccinations and fewer cases!?!
People, please wear masks indoors and get vaccinated - not because anyone told you to, but simply to protect yourselves and others, just in case - even if you're not sure what to believe?
Because what's the worst that can happen by simply wearing a mask indoors?

Now consider what's the worst that can happen if you don't?

Well, not only are you putting yourselves and others at risk, but then the only group of people factually proven to be guilty of "killing our country from within" isn't immigrants, it isn't "the government," it isn't Democrats,  and it isn't "Godless liberals" ...

... it's people like YOU,  not heeding sound medical advice and putting your paranoid political beliefs above good-old fashioned common sense.

Hence, you'll have no one else to blame for "killing our country from within" - but yourselves.