Up Schitt's Creek WITH a Paddle :) 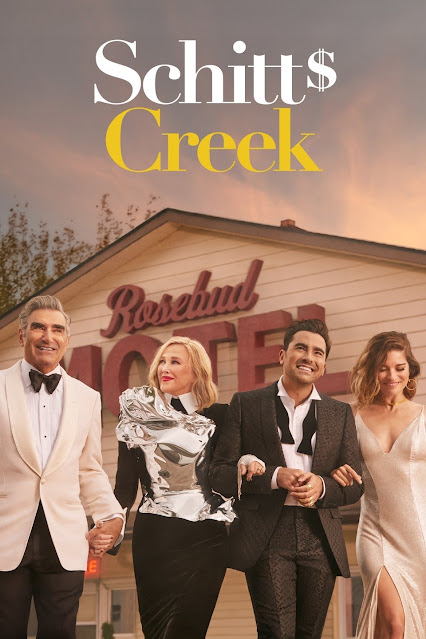 So I originally started watching Schitt's Creek last fall, just the first two episodes - and to be honest, though I smiled a couple of times, I didn't get what all the fuss was about - AT FIRST ;)

I think it's because I couldn't relate to any of the characters, right away, and frankly, didn't care if the Roses drowned in their financial troubles lol.

Then we recently started watching further - and now, I get it - because the ingenuity of this show is the slow peel-back of the layers upon layers of BS - the revelation of their humanity, over time :)

For those unaware, the premise is the classic fish-out-of-water scenario, in which retired video-store mogul, John Rose (Eugene Levy), and his retired soap-opera-star wife, Moira Rose (Catherine O'Hara), now socialites in LA worth millions, lose everything, after finding that their accountant has been embezzling their money for years, including not paying the IRS, and has skipped the country; thus, all they are left with is a small town that John bought as a joke for his son called "Schitt's Creek."

Their wealthy friends completely abandon them, and thus, John and Moira, and their two n'er-do-well children without real jobs - David (played by Eugene's real-life son, Daniel Levy) and Alexis (Annie Murphy), pick up and move to the town's motel.

(*Of note, many people don't know that in addition to Eugene Levy's son. Daniel, playing David, the role of Twyla, the cafe waitress and family friend, is played by Eugene's daughter/Daniel's sister, Sarah Levy. )

Though they are liberal, they are also the poster people for clueless white privilege, and thus at first, they will annoy the living crap out of you; sometimes making you laugh with quick wit, but their cluelessness for how the real world works and their lack of concern for anyone but themselves will grate.

HOWEVER, the magic in Schitt's Creek - and yes, there is magic even up Schitt's Creek without a paddle -  isn't a particular episode, like a sitcom (though there are favorites) ...

... the magic is in watching the worst circumstances bring out the best in them, over time; watching the characters grow and change - watching all the layers of disingenuousness,  cynicism, self-preservation, and judgment of those unlike themselves, begin to slowly just fall away, revealing their humanity :)

They begin to realize that yes, even though the people of Schitt's Creek are corny and simple, they also shared what little they had and took them in despite the Roses' judgment of them, versus their former snooty rich friends who abandoned them, most of whom were just looking for an invite to their lavish parties and a photo op. 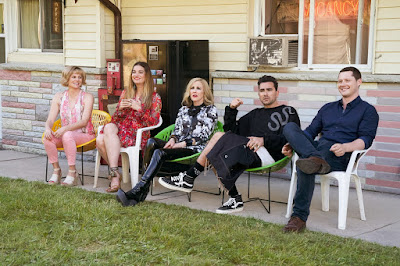 Despite a dysfunctional relationship, John and Moira clearly still love each other deeply;  however, with all four having lived separate lives before, including the parents never being there for their children because of work/themselves, all four now have to stick together and push to survive and recover financially.

After a time of abject depression in which they do absolutely nothing, they then try to find normalcy by doing what they have always done, which of course, doesn't work;  then get menial jobs they quickly lose, and finally, they begin to dust off old skills, or learn new ones through education, to help the family recover.

Of course, they still retain some of the old ways - particularly Moira, who will never let go of her absurd wigs and crazy costumes lol ... 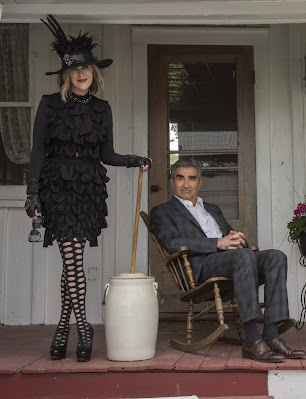 Lastly, it's the first time on television we see a gay romantic relationship begin and grow - just like a straight relationship - just as heart-melting, tears-to-the-eyes, off-the-charts adorable, without being cheesy, due in large part to David's business partner and fiance, Patrick - we LOVE Patrick :) 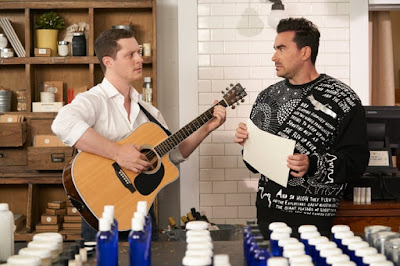 Yes, though it's a retold fish-out-of-water tale, heavy on the Arrested Development sauce, with bits of Frasier, Seinfeld, and Friends sprinkled throughout, it still manages to be fresh - in fact, this is one of the few shows that I can count on one hand that grows on you with time, as well as the only show that I've ever seen which truly gets better with time :)

My fellow Americans - particularly in Hollywood - Canada is currently kicking our ass in comedies, i.e. Schitt's Creek and Kim's Convenience (plus it's cheaper to film in Canada)  - better watch out! :)