(*Edited - screen shots and links added, updated as the day goes on.)

All is well, but I'm told the 6-hour mark is when the flu symptoms happen, if they happen at all, we shall see.  I'm told staying well-hydrated is key to lessening the second-shot symptoms; not sure that would reduce flu-like symptoms from an induced vaccination, but I'm doing it anyway lol.

After the first shot, I really had no side effects  -  just a tad bit of sleepiness/tiredness  - in fact, interestingly, you may recall that I said it felt like the first trimester of pregnancy.  In other words, it just felt like a lot of activity was going on internally, making me tired,  rather than true side effect.

Also, my husband and I both later noted less exercise tolerance, having to build exercise time back up on the cycle - not due to breath issues, but my muscles tired quicker.  It did go away though :)

Since then, I will say that when Baptist Health sent a newsletter about women's menstrual cycles getting weird after vaccination -  a light bulb went on. 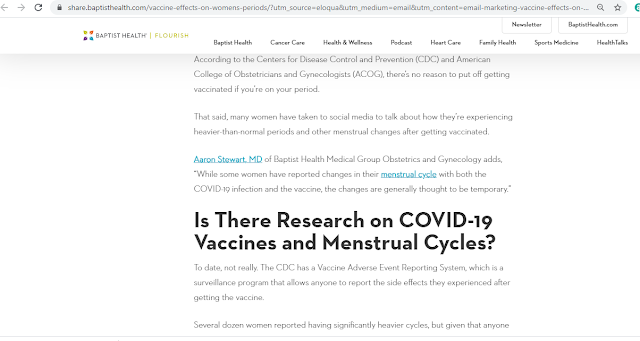 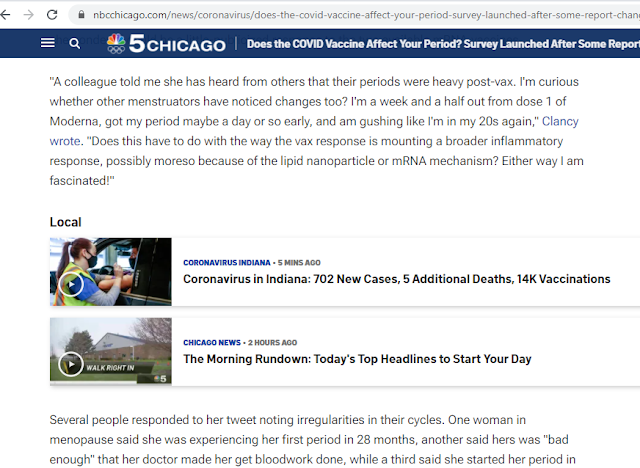 Now - keep in mind, as you read further, that though I'm fairly body-aware, I have typed hospital reports for 25 years (now pharmaceutical market research interview), all day, every day - so I'm not much of a hypochondriacal knee-jerker about health stuff.

I've heard the worst case scenarios, and if there ever was any "I wonder if I have that?"  - I definitely lost that, the first year, because most likely, you don't - so you just learn to listen and type or you'll drive yourself insane.

In fact, my husband could never do this, because he's the sort that  if he happens to hear a snippet of my work while plugging in my headphones, or any commercial that comes on TV regarding health, he goes:

Me:  "Well, I'm pretty sure the medication in that ad is  a monoclonal antibody,  an immunotherapy treatment for triple-negative, refractory or recurrent, advanced, metastatic breast cancer, so ... no lol.  Though breast cancer isn't unheard of in men, it's extremely unlikely, particularly triple-negative type."

Mark:  "Oh lol.  I just heard the first sentence, immunotherapy, and wondered if it could boost my immune system and avoid the cancer in my family."

Me:  "Erm - no, dear.  That's not what that means or how that works.  It's a monoclonal antibody that acts on specific receptors for people with breast cancer, who are either refractory to treatment  or have had a recurrence of their cancer and it has metastacized; meaning they've already failed first, second, and sometimes third-line treatment, i.e. chemotherapy and other immunotherapy, so they're still terminal.  Studies have shown this immunotherapy can extend their lives by 11 months at most."

"It's being studied in other kinds of cancer, and for use earlier on in the treatment line for people with specific gene mutations, but right now, it's only FDA-approved for treatment in later-line metastatic breast cancer,  not prophylaxis or prevention.  We'll get there someday, probably in the next 25 to 50 years, but not there yet."

"Like you'd take it, even it was prophylactic - I can barely get you to take your aspirin a day after your stroke, a statin for cholesterol, and your PPI on a regular basis for acid reflux lol.  You hate taking medication lol"

Also, he claims he's lost his sense of smell since vaccination - forgetting that just the other day, he said, "God, that diesel fuel stinks" about the truck next to us, as well as how good dinner smelled the night before last ;)

I love my husband, as you know, and he's an extremely intelligent man - but this is just one of his delightful quirks - when it comes to health info, listen to the first sentence and then panic ;)

(I, of course, have my own irrational anxieties, as I've mentioned ad nauseum here - health just isn't one of them.)

In other words, being a medical transcriptionist for multiple disciplines, inpatient and outpatient, you pretty much learn how to know when something is serious or not, and most of the time - it's not lol.

I'm also freakishly good with physical pain or illness - well, with one exception - nausea/vomiting, the stomach flu,  I just want to lie in bed, not move, be left alone, and perhaps want someone to shoot me.  That is because when I get stomach flus, I get them hard, and often have ended up dehydrated with an IV in my arm.

But respiratory illness or  broken bones or childbirth?

Nah, I don't need any pain meds or sometimes even symptomatic treatment like anti-congestion stuff unless I can't sleep or it bothers others, because I feel foggy/can't concentrate with those.

(Emotional pain or hormonal moods changes are another story lol.  I'm pretty sensitive and know better than to try to be a social butterfly when hormonal especially, so as not to bother others.   I've also learned to compartmentalize emotional pain quicker, too, at least when working - unless in true trauma trigger mode, but that takes pretty specific and significant triggers.)

Thus, as a result of being good with pain/illness, when it comes to myself,  I likely wait too long before going to the doc (as I've been scolded recently by my OB/GYN and my urologist, but still nothing serious, we just could've addressed these issues sooner - but I had to make sure my husband's health issues were taken care of first)  ;)

So may I just say that BH's newsletter, and other sources, report there is "no data" on this yet, it hadn't been studied - until now - as so many women reported it.  Though it could be stress-related, so many women are reporting it that it's getting hard to ignore.

As for me, I already had experienced abnormal heavy/prolonged bleeding last summer, found I had fibroids and was entering menopause, and went on birth control.  Since then, things had been controlled.  In fact, I didn't bleed for four months - but then started bleeding again last month - for 10 days (and counting).

I had assumed it was just hormonal fluctuation, perhaps I'd gotten a new fibroid, or I hadn't entered full menopause yet.  I briefly wondered if it was related, but really shrugged it off as not being likely (we women are conditioned to do that with female issues ;)

Besides, even if it was, there's nothing I could do about it other than what I was told to do with breakthrough heavy/prolonged bleeding bleeding - if it goes on too long, double up the meds until it stops.

Again, there is "no data" on this subject yet and there could be other factors - but hopefully, it's being studied now?

It's been 4 hours and I feel fine (but 6 hours is supposedly the kick-in) - but I've decided I'm going to blame everything on the vaccine anyway  lol ;)

Me:  I don't feel like cooking dinner tonight, let's order out - damn that vaccine!"

I may jinx myself, in another couple of hours, so I'll chill with that lol.

I feel maybe a little warmer than usual, but no true temp rise -  in fact, not even extra tiredness, at least not yet - so far so good!

Just starting to feel a little bit off, but only very slightly - a little arm soreness and overall low-grade warmth, but that's it - not even a low-grade fever, really, but definitely no aches or anything. Energy level is fine - actually, better than last time.   We'll see, as they say side effects can start as early as 6 hours later, up to 12 hours later - but I think we're good! :)