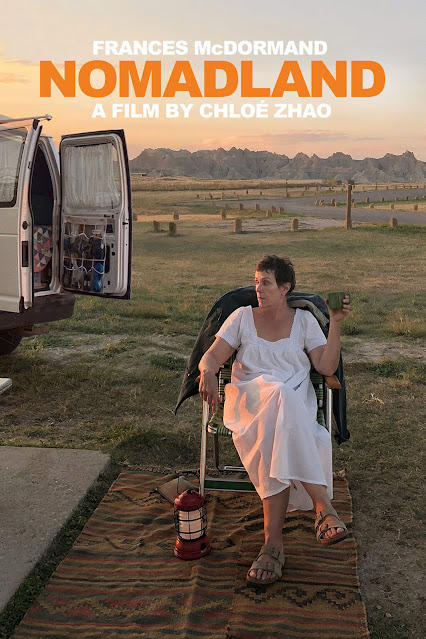 This movie win is significant for me personally, though I haven't seen it yet? lol.

Because you see, I, too, was homeless during the Great Recession, by 2010 - but unlike her, I didn't live in my van or a car, because I sold the old clunker to the junk man for rent money.

And though I stayed with others briefly, I ultimately chose to live in a shelter by choice, rather than impose any further on others, until I could scrape together enough for a security deposit and half a month's rent  with a roommate.

And I had said, to my shelter-mates, during the recession:

"When this is all over, there are going to be books written and movies made about this - we're going to find out we weren't alone.  Stories about how many people actually went under, during the recession - especially menial labor and  those living paycheck to paycheck."

"And it's not going to be a pretty portrait of America, but we're going to need to look at it, because it's reality and could happen again - and we need to start looking systemically at homelessness rather than individual flaw."

"Stories about the lack of consumer protection, how unkind/unmerciful people were to one another, how anyone appearing kind was usually actually predatory in some way, scavenging.  About much individual blame given for the homelessness, despite a broken socioeconomic system that crashed.

"As IF we aren't already ashamed enough, society piles on more, as if we aren't already shoulda/coulda/ woulda-ing ourselves to death, though we can't get in a time machine and go back, and even if we could and change certain choices, menial-wage labor is still menial-wage labor and the economy is still what it is, and it may not have changed a thing and there's no changing it now, it is what it is, and all we can do is move forward."

"About how many assumptions are made about an individual who is homeless even temporarily  - personal flaws such as that you must lazy/don't want to work, that you didn't save enough (as if you could, as menial labor), a drug addict, mentally ill, or formerly did prison time - rather than taking a look at a broken socioeconomic system and circumstances beyond your control, like a recession or being laid off or surmounting medical bills or being given a crappy mortgage loan, or perhaps escaping an abusive home.

In fact, I knew one young girl staying there - working full time in fast food - because her mother's boyfriend  abused her (I saw the bruises).  Her mother, herself, was afraid of him, but felt she could do nothing or he'd kill her if she did.  She had dinner with her mother every Sunday, when he wasn't there.  "

"(As IF you even if you were an addict, mentally ill, or a released prisoner, you wouldn't deserve empathy anyway, but most of us staying in the shelter were none of those things, at that time - and yet we all found a way to live together and help each other our regardless.)"

"They blame the individuals, because it's easier than taking a look at reality of a broken system or an unkind and overly competitive society, making excuses for not feeling empathy for you - assuming you must deserve the situation you're in."

"And of course, no one ever assumes that you might be staying in a shelter or camper by choice, until you're back on your feet,  rather than further impose on family or friends, if they have those."

"And God forbid anyone at work find out you were homeless, there'll be trouble, during a time when people are competing for more hours, especially if you're doing your job well and others aren't, but still want your hours ;)"

"The only exception to that lack of mercy, kindness, and individual blame for your homelessness, during the recession, was by others struggling themselves - white, black, Latino, altogether."

"Because they knew, too, that the majority of others staying in homeless shelters, at that time, if not laid off, WERE actually working - sometimes two and three jobs just to make one full-time job, due to shortened shifts or reduction to part-time status.  They had simply had been living paycheck to paycheck and sank, and a majority of them seem to be women - particularly senior women, with lots of health issues :("

"(In fact, I once took a bus to a temp job in Cincinnati, from Northern Kentucky, that was a two-hour bus route, one way, despite only being 30 minutes away by car.)"

"We looked out for one another, swapped clothes, shared food, gave rides to work if someone had a car, protected each other on the street.  We told our stories and the others listened, giving hugs.  But we also still joked and laughed, cheered on Kentucky basketball in the shelter common room, and found  other ways to still find joy and have fun :)"

"And despite the market crashing in October 2008 - one month before Obama was even elected, and two months before he took office -  as a result of Republican tax breaks to companies that outsourced overseas (my job was outsourced to India four times) and lack of consumer protection including mortgage schemes  -  Obama will get left holding the bag as if he caused it, because economists predicted we wouldn't feel it until at least 2009.  Republicans knew that, as well as that Americans have very short attention spans.

And that's exactly what happened, isn't it?  ;)

Welcome, Nomadland - for being the first of these stories that I predicted to be told on the big screen - and congratulations on actually taking the Oscar for it!