God and the Drowning Man 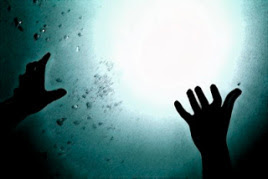 How to reply to this, at times when time-sensitive decisions need to be made that require more information?

Because if you do, it either looks like you don't believe in God enough, or like you're trying to argue with God or something lol.

In fact, previously, I actually used to recoil and roll my eyes, when I heard this - not because I'm not a Christian, I most certainly am - but out of my own issues - bad memories from my initial charismatic evangelical upbringing.  (I then went atheist, and am now Episcopalian in faith, Theraveda Buddhist in  adjunctive life philosophy, but that's another story;).

Back in the day, many, many charismatic evangelicals said these things, and it was always said in one of two ways:

(1)  Either when that person was doing something that defied logic and basic common sense and expected God to protect them anyway.

(2) When they were in a sort of state of denial, passing things off to God rather than using their God-given wisdom to take much-needed action.

(And sometimes both apply.)

The two people who said it to me this week would fit more in situation #2, I would say.

Also, there was a time in my life, where I felt very close to God and I felt like I was doing things the way Christ wanted according to his words in scripture, trusting other people who were family or claimed  to be Christian, and that I could trust them - but in fact, I couldn't - and God didn't "save" me - so I struggle when people say this.

In fact, it's very hard for me to believe like that anymore, because I  have personally accepted that God doesn't work the way I initially thought he did and likely doesn't rescue much; in fact, there's really nothing in the bible that ever promises us, the everyday Christian, "rescue," and that actual rescue is actually rare - but many Christians still believe this and I respect their right to do so :)

However, I also have recently realized what this phrase actually means, when people say it.

Whether or not they are in denial doesn't matter - either way, what that phrase actually means is: "I'm overwhelmed and I don't know what to do, so I'm hoping God will save me."

The second time it was said, this week, I was reminded of an old, country, Southern Baptist preacher that visited my grandmother's church, long ago.

Thus, before I told this story to the second person, who had to make decisions quickly, I prayed first for God to help me remove my own personal visceral reactions to this phrase, as well as to remove any residual panicked pushiness, and to instead remember Christ's advice first, which is  "Be ye wise as a serpent, yet gentle (or harmless) as a dove" (Matthew 10:16)

Once upon a time, a man was drowning in the ocean and prayed for God's help to rescue him.

Just then, a boat happened by and tried to pull him into safety.

Moments later, a helicopter flew over, dropping a rope ladder down, encouraging him to climb.

Not long after, of course, the man drowned.

When he got to heaven, he asked God, "God, I put my faith entirely in you, but you abandoned me. Why didn't you save me?"

God answered, "Son, I sent you a boat and a helicopter, but you didn't recognize me. Were you expecting me to come down out of the sky?  For something  to arrive with my nametag attached?  You were expecting something in exactly the way YOU thought I should, in YOUR timing."

"Not to mention, why were you out alone, in a rickety old boat, in the middle of the ocean in the first place, hmm?"

In thinking about this story, and my own struggle with where God was, during the worst time in my life, I recognized that there actually were red flags of what to do, who to trust and who not to -  and most importantly, that though I had faith in God - I didn't have faith in myself - in the wisdom God had already given me.

In that way, I kept going the way I thought Christ would want me to do, when in fact, Christ never said I should in the first place - a bunch of other self-professed Christians said I should, sure - but Christ himself never said so -  and in fact, there were lots of other red flags that let me know if I continued trusting these people, and didn't change course and let them squawk for my doing so, I would lose everything and everyone - and so I did :(

I'm sure God and Christ both are pleased to have your faith and your trust in them - but they also need your faith in the wisdom and logic they've already given you, to make decisions.

Also, God may or may not be trying to "save" you - but if you are so focused on the way you think God works and your own timing, how will you recognize him, if he does?