Trump Has Left the White House, and "A Weight Has Lifted" ...

... courtesy of New Yorker Magazine's cover, "A Weight Has Lifted," by Barry Blitt :) 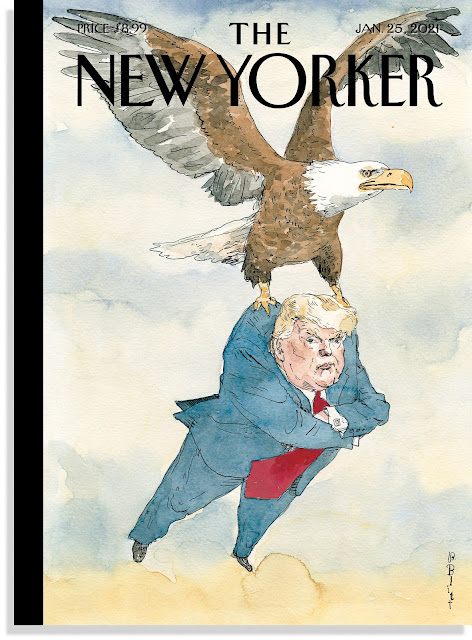 I hoping that this is the last post I will ever write with Trump's name in it, and he shall henceforth and hitherto be known as "The Thing" or "He who shall not be named" lol.

It's reported he'll go to Mar-A-Lago.

That's fine, Trump.  Please take all the thugs, criminals, frauds,  cons (college-entrance and otherwise), and espionage traitors, that you just pardoned, with ya - we won't miss them either.

Perhaps you can continue to run your cons on each other and leave the rest of us in peace?

Because in the end, though it was close, most Americans were too smart to fall for your fraud :)

In the meantime, we'll sanitize, fumigate, and exorcise the White House, both for COVID and any negativity you left behind.

Go forth and sin no more!?!

Also, kudos to the Bidens, the Harris-Emhoffs, the Pences, the Obamas, the Clintons, and the Bushes, the McConnells, and everyone else in attendance for the inauguration today, for your bravery, despite the threats!

PS - Had my premolar extraction yesterday (of a previously root canaled-tooth, upon which the crown and tooth broke), but we decided to wait on the implant, to have orthodontics first (Invisalign), to straighten the remaining crowded teeth before the implant, since implants are immobile and permanent and orthodontics doesn't move them.

I had no sedation at all, just local, and was in and out in 15 minutes, with very minimal discomfort afterwards - just a little ibuprofen last night before bed was all.

Of course, I'm pretty good with pain (well, it depends on the type, I guess - I'd rather have this than a paper cut lol), but really, what they can do with dentistry and oral surgery, these days, is remarkable.

Now, just to watch for a dry socket, but it's unusual on upper teeth.