Poirier VS. McGregor: KO in the 2nd Round! 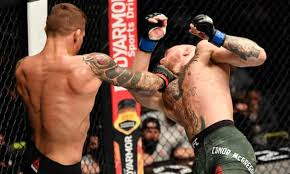 First, may I say, we didn't pay to watch this UFC fight, just the highlights - but I laughed my arse off when McGregor got KO'd in the second round.

BTW, it's not a nationality or ethnicity thing, it's an attitude thing - the selfless VS. the selfish.

It's also not a religious thing - in fact, both men are Catholic.

However, it does show you how two people of the same professed religion can interpret it very differently.

Because Conor McGregor lives for himself and his own advancement and glory  -  Dustin Poirier lives for Christ, his family, and the service of others - a true steward of his faith. 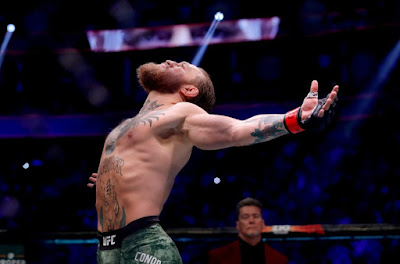 For starters, McGregor has a big mouth that goes way beyond the bounds of normal trash talk before a fight.  He gets way too personal and elevates himself to nearly god-like status.  It would be almost laughable if he wasn't deadly serious about what he says.

Also, he's been arrested numerous times, over the past few years, after losing his temper and smashing up other people's stuff without remorse, as well as faces sexual assault allegations.

Dustin Poirier dropped out of school in the 9th grade, getting in street fights - but now is married, has a baby daughter, and a charity called "Good Fight Foundation" which gives much of the proceeds of his fights and auctioned-off fight items to food for the poor children of Lafayette, Louisiana, where he's from (he's Cajun or French Acadian), as well as to clean drinking water for Uganda. 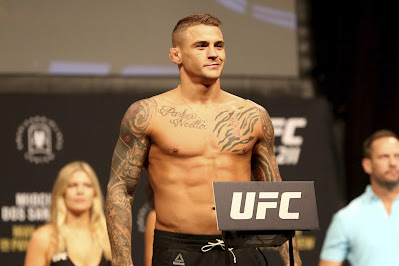 We don't know what Dustin Poirier's politics are.
However, what we do know, is though Poirier had a rough childhood, clearly, he's become a very charitable human being, taking Christ's compassion seriously, even naming his charity after I Timothy 6:12:

"Fight the good fight of faith, lay hold on eternal life, whereunto thou art also called, and hast professed a good profession before many witnesses.

Thus, can I just say that for whatever reason, watching that moment felt like Poirier rendered a KO to Trumpism (selfishness, greed, and self-glorification in Christ's name) lol?

Keep up the good fight, Dustin - benediction (blessing in Cajun French) on ya :)

PS - I've said many times that suffering can sanctify - if you allow it to.   Some get bogged down in their bitterness; others never forget it and use it to help them learn even greater empathy for others.

Poirier is an example of someone who has turned their suffering into selflessness :)

On the other hand, in other news, I was shocked that Kelly Stafford, the wife of Detroit Lions' quarterback, Matthew Stafford, tweeted out that Michigan was a "dictatorship" during COVID for closing small businesses temporarily again (like what, the hair salon)? 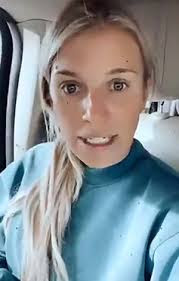 It shocked me because this is a woman who had a brain tumor removed, that turned out to be benign.

Thus, you'd think she would know, better than anyone, how precious life is - and how much her privilege enabled her to afford that treatment so many couldn't :(

Okay, I understand your concern for small business, and hopefully, help is on the way - but aren't people's actual lives more important than money?

I also understand not being able to go and do what you like is frustrating - but then I remember a time where I couldn't even afford peanut butter, forget about being able to afford health or dental insurance - and it wasn't during COVID.

There are many people. in this country, who have live this way chronically, Kelly, not just during COVID - because they can never afford to go and do what you do - and now, their health and actual lives are threatened by COVID on top of it.

Now, you could be a spokesperson for making healthcare affordable for all and a more equitable healthcare system - but instead, you're bitching about not being able to go to your favorite small businesses (like what, the hair salon?)

Girl, you were given a gift - and instead of using it to make you a more empathetic person and realize what's really important, here, during COVID, you're just throwing that gift in the garbage :/

I understand that Matthew Stafford has expressed a desire to be traded when his contract is up, this year.

Yeah, good luck with that.