For Manny: SNL's Parody of the Michigan Hearings ...

I debated whether to post this, right now, considering Manny's death (see below post), but I know he would've laughed at the SNL parody hysterically, as well appreciate the fact that he had to deal with crazy conspiracy people, like this, on a regular basis.

So this is for you, Manny - thank you for what you did for us and the FCPS kids - and I hope you're still finding a way to laugh, wherever you are :)

Now - for those of you who didn't see the original clown show of Michigan election hearings, this week - to include Giuliani's - erm - audible flatulence issues  - and an apparently boozy, especially belligerent Michigan-style "Karen" named Melissa Carone as Giuliani's "star witness"  - the real clip is below (the 2nd clip.)

See if you can tell the difference between an SNL parody and realty -  I nearly can't, because these things really came out of that Carone woman's mouth.

That's the real Melissa Carone on the left, and SNL's Cecily Strong parodying her on the right  - and may I just say I laughed at both equally hard, for very different reasons - and I couldn't help myself? 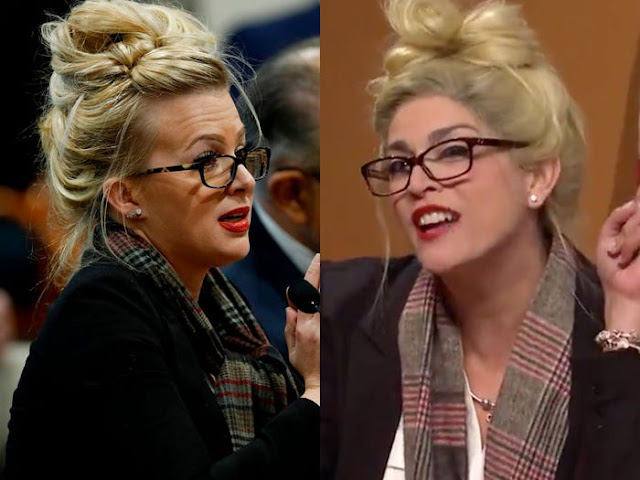 For the clueless, THIS is a true Karen - an especially boozy, belligerent Michigan-style one.

So can you tell the difference between parody and the real Karen - erm - I mean, Carone?

Btw, for those unaware, the person questioning her -  whom she accused of "doing something with them (the ballots)" -  is Michigan House Representative, Steven Johnson - who is a Republican and Trump supporter!

And she became so belligerent that even Giuliani shushed her at one point! lol.

Thus, her ever-changing allegations without evidence were investigated and easily disproven - and I'm sure accusing fellow Republican, Trump-supporting State Representative, Steven Johnson, of "doing something with" the ballots during her hearing, didn't help - and thus, Giuliani's "star witness" was deemed "not credible" witness and Giuliani lost.  Again.

Also, since this hearing, press is reporting that she, herself, is in the midst of an ongoing cybercrimes charge and investigation.

Yes, Ladies and Gentlemen - this is America has been reduced to - a complete clown show, and where undignified and crazy is the new normal -  and you can't  even tell the difference between an SNL parody and reality anymore, and any ole' boozed up Karen or militia man can walk in off the street and Giuliani makes them a star witness lol.

Speaking of undignified,  the saddest thing is Giuliani.  He could've walked away with his handling of 9/11 under his belt, and his dignity - but no.

His legacy is now this sad, embarrassing end of his career, in which he will forever be remember with his hand down his pants in a hotel room with a person he believed was a 15-year-old girl in Sacha Baron Cohen's latest movie, as well as for Grecian hair formula running down his face and audible flatulence issues during his hearings -  and being accompanied by a cavalcade of crazy people, who have no clue of how crazy they are, because they surround themselves with other crazy people.

You can't hear my tone, as I write this, but these things really happened and I'm not being cruel - and it actually makes me very sad, to just watch Giuliani's slow, humiliating descent into madness, actually, and I actually feel sorry for him.  And I'm curious why the people that truly care about him don't try to stop him?

Speaking of which, come on, now, Trumpers - is this really the best you've got and the legacy you want to leave us with, regarding Trump?

Regardless, hope you're laughing, wherever you are :)

P.S. - Yesterday, while walking our dog, my husband came across someone he sometimes chats with, who also walks their dog.

Considering Manny just passed (see below post), he was, of course, in no mood for what came out of the person's mouth.

Man:  "What do you think about all this COVID nonsense?"

Mark:  "Uh, well, I think it's pretty dangerous, with the danger especially being that we don't know what phenotype we'd get, mild or severe. Why?"

Mark:  "Oh, I see.  You're one of these conspiracists that believe all of the nonsense that comes out of Trump's mouth, still, huh?"

Man:  "Donald Trump has done more for me than any president, and I believe whatever he tells me.  "

Mark:  "For you personally, huh?  Okay. Like I really needed THIS today.   See, that's insane.  Everything you've just said is insane.  You're an insane person ...   AND we're done talking, here"  - - and just walked away.

Okay, ordinarily, I would think this was very rude of him, but under the circumstances, considering how much this country has normalized crazy to a dangerous degree  - LOL!

As for my husband, no worries - we then went out and got a tree and some cedar boughs, and began decorating, which helped a little - pictures soon.