This Inexplicably Popped Up in My "News" Feed Today - Hahaha!

Allow me to assure you, I literally never read the Daily Mail. For Americans not familiar with it, the Daily Mail is like the Fox News of Britain, only worse - even less factual (if you can believe that) and more obviously tabloid.

However, this popped up in my news feed - the only reason I can think of being because it's about Lexington? 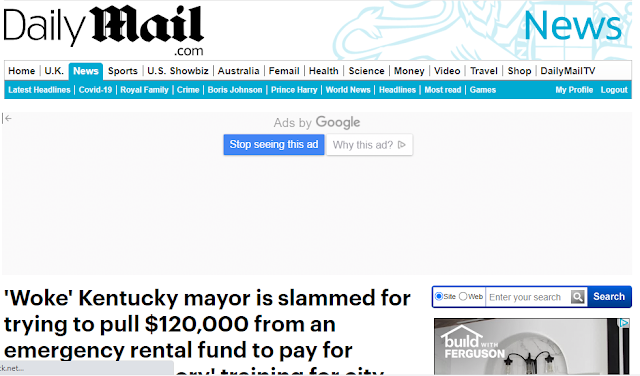 Oh, wait - they were serious.

Erm - first of all, Mayor Linda Gorton is a Republican -  mostly a Trump-supporting one.

In fact, my husband has been in meetings with her for work, and let me tell you, she is pretty freakin' far from "woke," lol.

Now, she is a former registered nurse, so she's more compliant with Governor Beshear's social-distancing regulations than other Republicans are here, yes  - which is why the Trump-supporting/alt-right Republicans aren't happy with her.
And she did noticeably shift her attitude on racial justice - slightly - after the George Floyd video and Breonna Taylor (in Louisville)  - but note I said slightly.

But woke?
Seriously - even if you didn't live here in Lexington, or know anything about her at all, one look at those red, circa 1980s Nancy-Reaganish, Chanel-knock-off tweedy suits that she wears tells you she's a Republican/conservative lol ... 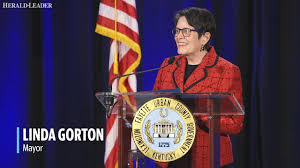 Secondly - and most importantly - the money from the CARES Act regarding housing is going to eviction prevention, which includes public housing, and $120,000 of the $2 million was voted on and passed by city council to be set aside for implicit-bias training, not "race training" - in order ensure that public city employees who run public housing receive implicit-bias training (which includes race as a socioeconomic factor, but not exclusively) before doling out these funds first - whether Linda Gorton liked it or not.
In other words, the city council made that budget decision -  not Linda Gorton personally - and it's not mandatory for private landlords and administration, only public-housing landlords and administration.
In fact, I'm fairly certain it wasn't even her idea - and the budget proposal was initially made by other city officials - both male AND female.
In fact, I could be wrong, but I'm pretty sure she was negotiated into it before final budget approval, you see  ;)
We already have such training for cops, here, but had no such training for public city employees, and many on the council thought it was necessary before handing the money out.

Now, look, Trumpers/alt-righters - I'm sorry that you apparently still haven't read or don't understand U.S. or state constitutions, nor our county and city statutes, and thus believe our leaders (like Trump?) can and should have powers like a king, without some sort of checks and balances or oversight  -  but the truth is, they don't.

Our mayor simply doesn't have that kind of power, to single-handedly shift budget items without approval from city council, even if she wanted to (which I'm fairly certain she did NOT want to do this, at least at first)  -  there's a city council that proposes different aspects of, and approves, the budget!

As for me, I'm not sure about that amount, $120,000 - but I do think implicit bias training is necessary before public city employees just hand out eviction-avoidance funds mostly to unemployed white people, deeming them "more deserving" than people of color, which is so often the case, here in America!

Because implicit racial bias is baked into our culture, even with people who are not overtly racist, or even imagine themselves anti-racist.

For example - when money is "supposed" to be given based solely on need, right?

However, in reality, people often either semi or subconsciously make decisions based on who they consider the most deserving, rather than who has the greatest actual need - convincing themselves their decisions were made on "background history" versus what it actually is - socioeconomic/cultural ignorance and implicit bias.

A more obvious example of implicit bias is when an untrained civilian teenage boy takes takes a gun and shoots several people, we Americans tend to say "poor, ignorant, troubled young man, in need of help" if he's white - even calling the shooting "justice" or "self-defense" sometimes-  but if he's black,  he's just a "thug" and "criminal who should be in prison."

I was educated in social work, believe me, I know about implicit bias - even among my fellow social work students, here, I'm sorry to say :(

But the truth is, none of us are immune to implicit bias, because we are all a product of this broken socioeconomic system and dysfunctional, sometimes even toxic culture, which is why we have to check ourselves before we wreck ourselves when making decisions like these.

Regardless, that woman wouldn't know "woke" from Wichita, believe me - and one can only hope that she, herself, takes the implicit-bias training the council approved.

So way to go, Daily Mail!  Thanks for publishing complete BS again, contributing to the mess created by political propaganda, paranoia, aggression and violence by that are already at maximum capacity, here, in America.

But I guess that's easy for you to sit back in the U.K. and make up stories that incite aggression,  considering you don't even live or work here, isn't it?

Ya know, I'm all for freedom of speech and press - and even give slack for ignorance and mistakes - but I am NOT for legally protecting conscious and malicious libel as "freedom of speech."

And people that actually believe this crap, just because they see it printed on the internet - I can't decide if they're really that ignorant, stupid, and/or gullible, or if they know dang well it's not true and don't care, and just want to use it to manipulate fear in order to gain political power?

Considering the IQ level and dishonesty of the people I've seen that try to cite the Daily Mail as a "legitimate source" of press information, I'm going to go with a combination of both stupidity AND dishonesty lol.