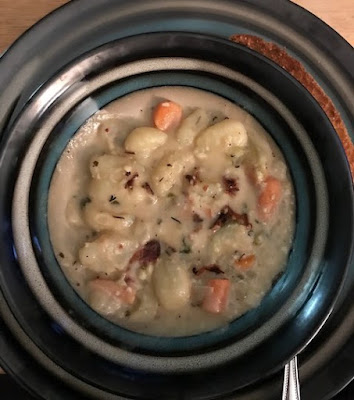 So Christmas week, I usually want something simple in the days leading up to the big cooking on Christmas Eve/Christmas, that I can heat up the next day or two for quick dinners while hustling and bustling about.

While looking up the popovers the other day (see two posts below), I found this recipe by the same food blogger - and it's delicious!

I like her style - she gives ideas to replace with healthier items - i.e., coconut milk instead of cream.  I also replaced spinach for kale, and only sprinkled about a 4th of a piece of the rosemary bacon on top - ya gotta have at least a tiny bit of bacon crumbles - that's what sets it off  ;)

Heavy, though, regardless, so just about a half a bowl with a slide of ciabatta with olive oil and Parmesan sprinkle should do ya :)