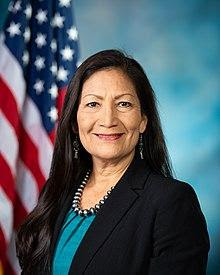 President-Elect Biden has appointed U.S. Representative, Deb Haaland, as Secretary of the Interior.  She is member of the Laguna Pueblo tribe and a 35th generation New Mexican.

She also does not come from money and does not have big money.  Though she owns a small business now, "Pueblo Salsa" - the 60-year-old was a single mom, living paycheck-to-paycheck and often resorted to food stamps, including while attending college when she could, to eventually graduate and start a small business.  In fact, she is still paying off her student loans (I feel that)  lol.

I love the idea of somebody somewhere, child or adult -  but especially a child - saying to themselves - "She's like me.  If she can do it, I can too!" - whether it's because they're Native American or a person of color, poor, a woman, a single mom - anybody who doesn't "fit the perfect mold" that we've created, here in America, and has been demonized as a result.

A "perfect mold" that doesn't actually exist - it's just that most of us don't have the money, power, family, or social support to make our problems and/or mistakes "just disappear" like many white privileged do :)

Having said that, those of you who came from privilege, or acquired it through education, I'm not knocking you necessarily -  I know some very kind, empathetic wealthy people - it's just it is unusual because naturally, you just wouldn't know.

The wealthy people I know that are empathetic are the result of their parents did a very good job of teaching them empathy for others and educating them about how most people actually live, or in other cases, it was because they otherwise knew personal struggle at an early age, even if not financial (i.e., illness, disability, parent's death, etc.)

Empathy meaning emotionally feeling for/understanding where others are coming from, despite never having been in that situation yourself, and/or at the very least, are willing to listen, learn, and be educated about those experiences and perspectives. :)

And consider this - if you haven't yet truly suffered in life, you will - as I firmly believe we all have to go through a time of suffering - whether as a consequence of your prior choices or not - even if it's not until our hour of death.

But don't be afraid - because suffering can sanctify - it can bring you closer to God and/or enlightenment, if you allow it to :)
Let the anger and sorrow you feel during your suffering not eventually turn into bitterness; but instead, let your suffering eventually teach you the depth and breadth of Christ's compassion and empathy for others :)

Congratulations,  Deb Haaland - you're an inspiration!