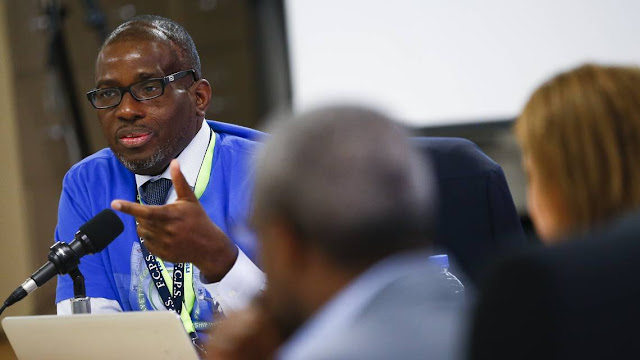 Mark got a text from his coworker just moments before press announced it.  No cause of death was given, and all we know is that he went on emergency medical leave last week until January, and that he beat brain cancer in 2015 (actually, the tumor was removed from his sinus cavity).  Mark texted him, to ask if he was okay, but got no reply.

We assumed the cancer had returned aggressively, but it's also curious that they didn't give cause of death, so we're not sure yet.

Manny was an extremely brilliant, savvy, tough-but-tender, passionate man, who tirelessly fought to improve the lives and education of children, particularly demarginalized and impoverished children of any race, but who also was the first one to laugh with you - he was just a remarkable, remarkable man, an inspiration.

I just heard his cheerful voice and laughter not two weeks ago, at the beginning of my husband's Zoom meeting, before he put his headphones on.

There was no indication whatsoever that he was ill, in appearance or voice - just the same articulate, super-sharp Manny, quick to laugh.

He was just 49 years old - and will be sorely missed:(

I initially ended this post there, but as I sat here reeling, I felt not only sadness and tears, but to be honest - a little angry.

That is because he spent the last few months of his life fighting tooth and nail to keep those kids and staff at home and safe until he was absolutely sure, resisting pressure, a petition against him to take his job over it, and even threats - he took a lot of shit from people pushing to get the kids back in school - no one knowing he was ill.
I understood parents who needed child care, but a lot of this was led by Trump Republicans and was political, believing nonsense conspiracy theories and that the virus was a Democrat "hoax" and Democrats were "just trying to control them."

In fact, and I'm not sure if this is true, but he was rumored to have said that he'd put himself in harm's way and die himself, before he'd ever send those kids and staff back in - not until he was 100% sure it was safe.

Maybe I shouldn't say this, now, I'm still in shock, and quite emotional - but I have to admit, I AM angry - at all you Trump Republicans that gave him so much shit, the last few months of his life.

Of course, it's not your fault he died - but I can't help but wonder how you feel, now - knowing that man spent the last few months of his life battling YOU unnecessarily, based on your conspiracy nonsense, simply because he wanted to be sure it was safe for those kids and staff, and that no more staff died from COVID - over what, in the end?!?

Forgive me, God, and anyone reading, if that's wrong, but it's an honest initial reaction.

I can't help but feel both sad and angry, that this is how he spent the last months of his life - embroiled with people who believe nonsense conspiracy, who care more about money and political power than people's lives  - that poor, poor, brave man :(


I also can't help but wonder why it seems the best and most remarkable people are the ones being taken during 2020?

I'm probably wrong about that and talking out of pure emotion, but it sure seems that way, at this moment, anyway ...