"Where the Crawdads Sing" - The Movie 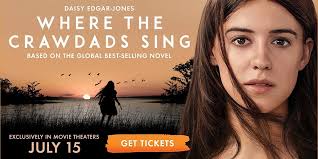 So the movie version of this book just premiered, this week, produced by Reese Witherspoon - and I'm almost afraid to see it because I don't want to be disappointed after reading the book! :)

(I hate dat, when a movie ruins a good book, right? With a few exceptions, the movie versions of books aren't usually as good.) 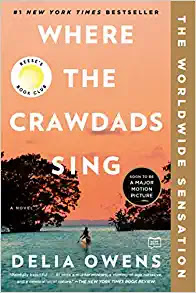 Plus the reviews aren't so great from critics (although audiences loved it).

I haven't read the actual reviews yet, I'm just judging by the scores - and I'm wondering if the critics read the book first and if the score isn't based on that, or they haven't read it and were disappointed with the end, which you're supposed to feel conflicted about.

In fact, I, myself, was disappointed with the end, though I get it, and still a good read.

Without giving too much away, I was like, "After all the tall tales about her, the lies, why would she now make honest people out of them?" right?

In fact, I even talked to my (now retired) therapist about it - perhaps overly identifying with the character and also worried about social perceptions of women - who had also read the book.

I can't remember exactly what she said, but something like, "Right, well, it's not what you or I would choose, but you can also understand that for someone raised without guidance or even offers of guidance,  completely powerless in society, only observations of natural justice make sense to her - and we know that ignored social justice sometimes leads people to seek their own justice - which becomes fantasy poetic justice in novels. We don't condone it, wouldn't do the same, but we do understand it."

"I think we all can relate to Kya in certain ways, that's why the book is so popular -  and I can see how you, in particular, can relate to her especially, with your background - but the fact is, you're NOT Kya - you would never do the same -  but you do understand the temptation to finally make honest people out of some, right, since they already believe it anyway and nobody would either believe you or help you, especially with lack of justice, right?"

I guess I do - and at times, snapped back at them hard, with that exact thought in mind of making honest people of them, but it only made things worse - plus, in addition to a very strong sense of morality stopping me from ever considering any other options, I personally would never give them the satisfaction of making honest people of them - better to just let them think what they want and walk very far away and not let their gossip and behavior control what happens to the rest of my life :)

I accidentally did see a piece of a review, though while trying to avoid it, which said that it's very Hallmarkish/Nicholas Sparks-ish -  which was my worst nightmare that might happen to this story and a shame - because the love story is a side story, really, to her story and the bigger societal commentary, and actually takes a back seat as he disappears from her life for years?

I mentioned this book after reading it almost a year ago, and it ended up being one of the best books I'd read in a while (close tie with "All The Light We Cannot See" by Anthony Doerr) - neither book could I put down, which is always a good sign with a book :)

Though perhaps not a high-brow, technical masterpiece, it's written in the tradition of the great Southern novelist storytellers, particularly the female variety - Harper Lee, Flannery O'Conner, Barbara Kingsolver.

I can "hear" Harper Lee as a big influence, in both the social commentary regarding the rigid social constructs of gender and race in the American south, only less centralized to the story - but Lee, O'Conner, and Kingsolver held up a wall mirror to society, very shockingly and directly, whereas Delia Owens is more subtle - essentially the same social commentary, updated for today, but it's feels a bit more like she is slyly taking out a small compact mirror from her purse, feigning the need to powder her nose, but in actuality, holding up the same mirror to society as her predecessors, then putting it back in her purse for a while until she needs it again :)

(Also, the above three would need to originally be a wildlife biologist, before becoming a novelist, like Delia Owens was, which is the aspect of her writing that most differentiates her, especially clear when she details Kya's relationship with nature.)

It's about a young girl abandoned by her family, raising herself in a shack in the marshes of North Carolina, and the rumors of her of course taking on a life of their own - add a dash of a love story and a murder mystery.

As for the theme and subthemes, so many books today seem to "dumb down" the theme or supposed subthemes so that they slap you in the face -  but not Delia, again, holding up the small compact mirror.

She weaves in what are actual several adjunctive subthemes and social commentary into one rich tapestry to the main theme - i.e. how uncomfortable society becomes with women who are deemed too unconventional, too nonconformist, too independent, too natural, too authentic, or too "free-spirited" - the assumptions and harsh judgment that is placed upon them, and how such women are often mistaken for "wild," insane, sexually immoral, or stupid, their motives presumed the worst and often projected (rather than it being possible that what motivates them is far simpler)  -  particularly if they are poor - and the accompanying power abuse, injustice, and lack of social support that result, particularly in the American South.

Another related subtheme is how the supposedly "good Christian" white people in town have no compassion or mercy for her or her circumstances, too concerned with propriety, without ever considering that she had no guidance  - thus, mercy, compassion, and guidance are only displayed by people of color towards her,  who know all too well what it's like to live in such a society, and thus watch over her - as much as she will allow herself to be watched over and guided.

But the main theme is the reason I think women in particular fell in love with this book - because there's a little "Marsh Girl" in all of us, or a longing to be that surrounded by nature, that independent, natural, authentic and free - but knowing all too well that Kya's story is a cautionary tale of what will inevitably happen to any woman who dares to be, whether by choice or necessity  ;)

As I mentioned, I felt super conflicted about the end, wishing it didn't end that way, but knowing it was inevitable - and I'm wondering if they gave it a Hollywood ending instead?

I missed one of my favorite shows, CBS Sunday Morning, this past week, as we went to the park for a long walk - and just caught this clip of author, Delia Owens, who, don't you know, now lives, of course -  in the Blue Ridge Mountains of North Carolina :)

(Who knows, we might have even run into her in town, over the holiday there, and never known it?)

Regardless, I'll hold out a while before seeing it, just because I don't want to be disappointed lol.

However, I will say that I love, love, LOVE Taylor Swift's haunting, mountain-folk influenced song released for the film, simply called   "Carolina" ...

Perfect - well, it's at least an Oscar-worthy theme song, if nothing else?  :)