There is an awesome new dashboard, upon which staff, parents, and students can follow the weekly COVID count, which includes a breakdown of each school and staff building - the link is  at https://apps3.fcps.net/covid-dash/v4/dashboard.asp.

Here's a screen shot from this morning... 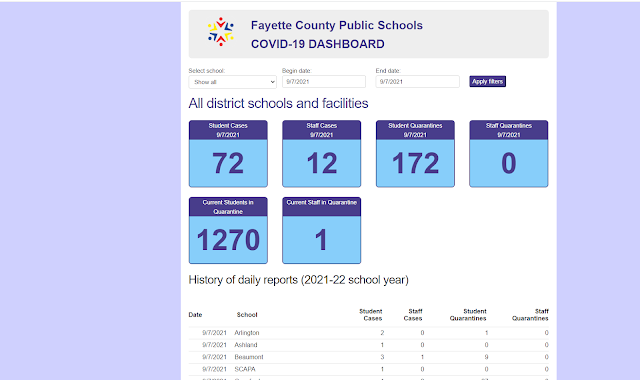 Thank you, great job, Dr. Liggins, to keep everyone on the same page and informed!

(Which Mark is on, but not the COVID count)

Also, here is the newsletter on COVID-19 from Superintendent Liggins that is sent to staff, parents, and students, which gives an additional vaccination report. 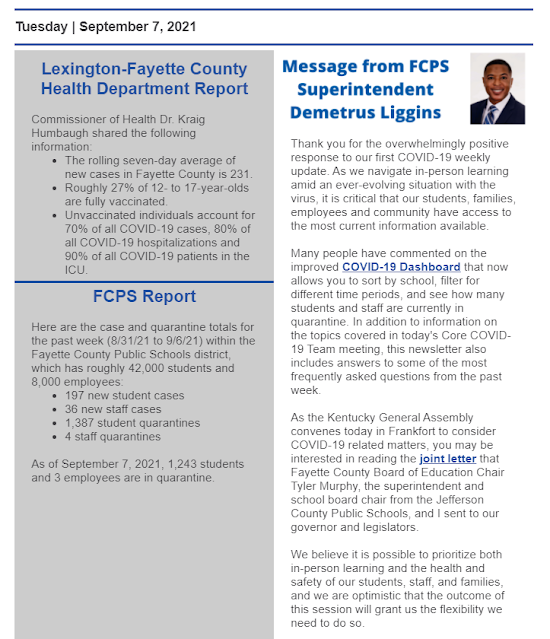 Note also that unvaccinated individuals account for  70% of all the new COVID cases, 80% of COVID-19 hospitalizations, and 90% of all COVID-19 patients in the ICU.

I'm not sure it could be much clearer than that - it proves the vaccination is working, largely to prevent more severe symptoms and hospitalizations.

HOWEVER - we also took note that the Kentucky General Assembly convenes today to discuss COVID-19 matters - and that Fayette and Jefferson Counties, and their school-board chairs, have written a letter to Governor Beshear, requesting "safe" continued in-person learning.

Okay, I like keeping us informed with counts - but good luck with that, considering only 27% of students age 12-17 are vaccinated in Fayette County.

Oh, and great, Tyler Murphy is on that case, coauthoring the letter to the KGA, I feel so much better and safer now.

(Yes, that was sarcasm.)

He's the School Board Chair I've mentioned that claims to be a Democrat, but we don't claim back, because he acts like a Trumper, including throwing public fits when he doesn't get his way, making crazy false accusations/backs conspiracies, and literally goes after people's jobs when they don't cave to his demands.

In total, Tyler has vindictively targeted the jobs of 4 people - including his fellow board member - anyone who didn't cave in to his tantrums - two white and two black - and with the other person of color,  he told the interim superintendent that she needed to advise this person to:  "be nicer to white people."

If you all knew who this person was, you'd laugh - because every time he saw my white husband, he'd give him a giant bear hug - long before (during and after) Tyler accused this person of reverse racism and had the interim superintendent "counsel" him.

Methinks Tyler just meant be nicer to him  - kiss his ass and give in to his temper tantrums - because the tension between them had nothing to do with Tyler's white skin color ;)

This from a supposed fellow Democrat, sitting on an all-white school board.

Regardless, the targeted person found work elsewhere and quit after being told that, because he recognized he was being targeted by Tyler for not giving into his demands, and making their disagreement about race when it wasn't.
And can I just say how hilarious hypocritical it is that his most recent accusation is of a fellow board of member's dishonesty, after he himself spearheaded a petition to have the former superintendent (Manny Caulk) removed for not returning the children to school sooner, then when Manny died unexpectedly from cancer, he acted like his best friend and actually held memorials for him? 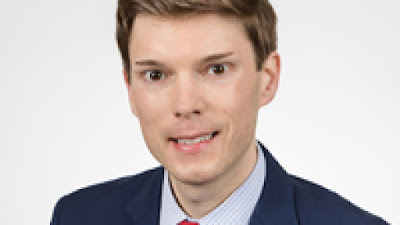 Many parents love Tyler, because he talks a good game in person and they don't know, unless they attended or saw the broadcasts of school-board meetings (particularly closed sessions) - which is unlikely - they didn't see him make crazy-paranoid accusations about transparency, throw fits and walk out of meetings, and they don't know how he has successfully gone after people's jobs when they don't cave to his demands (or just people he doesn't like), although the school board is supposed to have zero control over internal hires and fires.

I also think that if the parents of color knew about the above-mentioned staff member being told to "be nicer to white people" (meaning himself), as well as falsely accusing any staff who stands up to him, he'd be a lot less popular.

In short, don't be fooled, fellow Dems, this time on our side - just like Trump, Tyler Murphy will say anything to get elected - he's your stereotypical power-hungry, populist, vindictive, questionably racist little weasel, regardless of what political hat he wears - and I don't mind saying so publicly.

That may sound harsh and as you know, I'm a big fan of kindness and giving people the benefit of the doubt (my husband would say I give too many chances).

I don't like being rude, mean or name calling - but even Jesus had his exceptions, calling Pharisees and publicans a "brood of vipers" lol.

(1) Someone who has used up all of their chances/benefit of the doubt with me, and yet keeps pushing me into self-defense/defense of others I care about.

In this case, I don't know this person personally, so at first I gave the benefit of the doubt and chalked it up to gossip - until I saw for myself, ON VIDEO and audio recordings, of the unnecessary drama and temper tantrums from Tyler creates, with crazy accusations without proof and tantrums  - so Tyler Murphy falls into both categories 2 and 3.

In fact, I'm not going address him by his name anymore - henceforth and hitherto, he shall only be addressed as "Uncle Cracker."

Not like the band with this name, but because he looks like a creepy uncle AND because he is the very definition of a "cracker."

For those who don't know the derivation of the term "cracker,"  it originated during slavery, and it means a white person of power who cracked the whip on their slaves to keep control, imagining themselves as "benevolent patriarchs" doing what's best for society :/