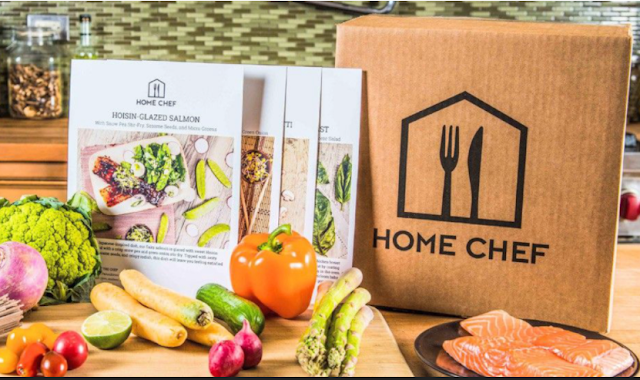 So a few months ago, for a college graduation gift to our honorary son, B, whom I've mentioned - who was accepted at both Johns Hopkins and UC-Berkeley for his Master's, btw -  I got him several meals through Home Chef - and he loved them!

He said they were both healthy and delicious and he and his girlfriend had a lot of fun picking out the meals and making them together, and they even had leftovers, so well worth the expense.

So HC had a special, recently, and we decided to try them ourselves - and they're on their way, they'll be here Friday!

In case you don't know how Home Chef works, it's a subscription (or a gift card) and there are several meals and meal plans to choose from, all healthy, but you have meal choices and can choose low carb, low calorie, low sodium, or all of the above -  you just pick your size, how many meals, how much prep you want to do (just pop in the oven or you want to assemble the meal, etc.), and they deliver them fresh, right to your door, via FedEx.

So today, the new weekly menu is out, to choose your items, and I forgot to mark down my password.  Then, of course, I locked myself out trying.  Then, while multitasking, I took too long to reset it, I guess, and the link expired (or so we figured out when I called customer service) lol.

So I spoke with "Raina," who was super friendly, and didn't make me feel like an idiot (though she would've been well within her right to do so), who correctly deduced that the link had just expired and she'd send me one directly.

Afterwards, I received a little survey to rate her on customer service, and I noticed they do things a little differently - they give you a little bio (I guess to make it harder to be mean to them, if you're THAT kind of person, who just takes out your frustration on random customer service people).

They also ask you to choose between rewards for them - a goldfish (lol), giving them one longer lunch break, or a gift card. 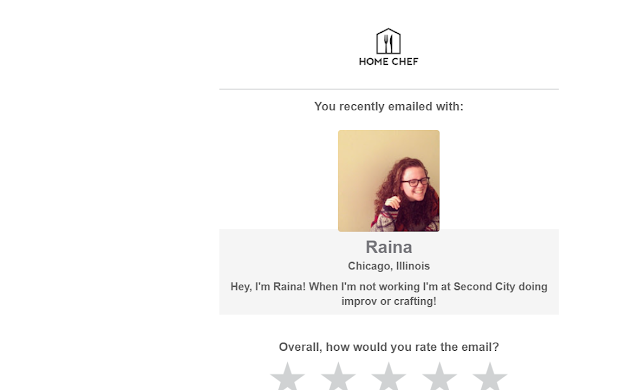 In "Raina's" bio, it mentioned she lived in Chicago and she is also a Second City (Chicago) player?!?

So ... I just checked their website,  and she's not on it (or at least under that name or one of the main-stage players) - so did she mean she was just taking classes?

And for those saying "If she was an SC player, why would she work at Home Chef, too?" - erm - do you know how much SC pays?

That's why they all have day jobs, too, like all struggling actors and comedians, I saw that on the Chris Farley documentary - they wait tables, are bartenders, taxi drivers, Uber drivers, even pizza delivery, you name it.

I also read an article a few months back that during COVID, SC nearly declared bankruptcy, because they had to shut down for so long, and the actors were scrambling for work :/

I'm thinking now, though, that she likely meant she just takes classes there, rather than being a paid SC player, because of the way it's phrased.

Regardless - that's about as close as I'll ever get to getting to talk to an actual SC-Chicago player - and even the possibility that she is an actual SC player, rather than just taking classes, sent me into fits of excitement - so I'm going to continue to believe she was, just working her day job (especially during COVID) - perhaps past the point of all reason - because it makes me happy, dammit! ;)


I was like, "OMG, OMG - was I just talking live to a real-live Second City-Chicago player on their day job?!? I'm not worthy, I'm not worthy!" lol.

So I chose 5 stars and chose the gift card, and in the comment box, I said something like "Because she was very pleasant, didn't make me feel like an idiot, and also because we have to keep supporting our Second-City-Improv-to-SNL pipeline, especially during COVID - thank you!"

Especially our Second City Improv Players -  they're a national treasure!

Now I just hope the food is as good as the customer service, but based on the review by others, I don't think I'll be disappointed!