In the Republican-Forced California Governor Recall Election, Newsom Defeats A Monster Trump Variant - In a Landslide 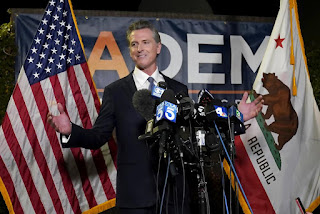 Despite Newsom losing much popularity, after implementing very strict COVID restrictions (which I mostly do approve of), as well as some very odd decisions when it came to the order of vaccinations, i.e., the homeless were eligible before teachers (which I don't approve of) - Newsome still easily defeated the monster Trump variant in a landslide recall election  brought about by Republican naysayers.

I think that in the end, it came down to people asking themselves:

In that case, for most intelligent, sane and/or non-treated addicted/dependency-issued people, it's an easy choice (because we know, and have seen, that many people cannot or will not properly respect social distancing and PPE on their own).

And by "non-treated addiction/dependency issues" I mean I have a new theory -  which, to be fair, is based solely on my personal experience and observation only.

My unproven new theory to explain Trump's popularity is that a large portion of his supporters are people with untreated addiction/dependency issues - whether their addiction is alcohol, pills, street drugs, sex, relationship, or even religious addiction.

(Even if you've never touched a drop of alcohol or drugs, you can still have the disease of alcoholism/addiction, mind you).

In other words, people with either untreated or partially treated addictive/dependent personalities, who tend to feel they need something or someone external to cope, to guide them, even "save" them, and often cannot see people or situations clearly and exercise poor judgment.

That is NOT a diss of people with addictive/dependency issues, you can't help it - it's likely a combination of genetics and dysfunctional-mindset upbringing - but what you can help is admitting you have a problem and getting treatment for it.
Also, don't expect a quick fix, it takes years -  especially if you have "saturated" brain from using -  but even if you've never touched a drop of alcohol or used drugs, the dysfunctional behavior is ingrained in you and you need to find or develop new brain pathways to cope.
In fact, though I rarely drink and have never used drugs, I, myself, come from a family with dependency issues, but have received (and am still receiving) treatment - it's amazing the clarity that comes from treatment/therapy, being able to see more clearly the people and situations around you :)