(Please see my updated cheat sheet with further details/easier ways to tell HERE.)
In case you're confused about Georgian, Federal and Dutch Colonial homes in my prior post, you're not alone.  But first, remember, you're literally watching our U.S. story unfold via architecture, transforming from plain under King George colonial rule and/or religious persecution into adornments previously only afforded to government or royal buildings before your very eyes.  Without a word being spoken - you can witness the most recent major human-society transition and progression take place, via architecture :)

The fairly rapid transition of American Colonial home architecture captured the spirit of what was happening in our country, in a sort of semi-conscious monument: People from various ethnic and faith backgrounds began to let go of persecution and oppressive pasts to embrace new cultural ideas, while still retaining the best aspects of their ethnic cultures.

Despite their differences, they began to unite together under the same basic human principle that binds all of the human species together - the desire for "life, liberty, and the pursuit of happiness" through autonomy and the right to freedom of speech, worship, and expression - birthed into fledgling reality as the first Democratic Republic in the world to provide legal separation of church and state - a government by the people, for the people - and began to reflect that in their architecture :)

I actually didn't realize that until today, but it's pretty cool, isn't it? I mean, of course I realized history and cultural influence could be reflected in architecture, duh! But I mean that you can literally still see the birth of fledgling freedom grow into bold and proud expression, through still-standing home architecture, all by itself, just by looking from one house to the next, right next door :)

Yes, those ideas of "all men are created equal" and "freedom of expression" have still not matured into adulthood in America, we still have a long way to go.

However, the rapid transition in colonial architecture is monument to what can happen when a glass ceiling placed to prevent opportunity is either willingly removed by the oppressors or shattered in battle with them.

Testament to the fact that when a group of people obtain freedom and equal access to opportunity,  they can accomplish brilliant, beautiful things in a short period of time, in collaboration - that we all can enjoy together :)

And where else in the world can you see so many historical homes with such diverse cultural and ethnic influences, all on the same block - retaining the best of their own culture, but also incorporating new cultural elements from their neighbors - and yet still somehow living harmoniously right next door to each other, blending in well with others on the block, without (mostly) being an eyesore to each other or the landscape?

So, in addition to watching the birth and and growth of freedom, you're also witnessing how it's possible for so many diverse ethnicities and faiths blend and unite for the same basic human cause - freedom and equal opportunity - just through architecture :)


Yes, America, I'm talking to you - learn our true history from colonial architecture - that a united, peaceful balance of past and present CAN be done - letting go of the worst of our culture, retaining the best - being open to the best new cultural ideas :)


It's not all or nothing - just like everything else, it's a balance - and sometimes you've got to sacrifice a little, to gain a lot - it's called growth and progress :)
Let's begin with distinguishing between Georgian and Federal, because these are the two even experts become confused about, so no wonder we are :)

However, before we begin, note that none of these homes are in Kentucky like my last post - I needed to use the best examples - the originals from along the Eastern Seaboard/early colonial settlements :)

So, the oversimplified, cheat-sheet guide is - the more elaborations on a Georgian Colonial, the more Federal Colonial it actually is - particularly if it has Neoclassical (Roman/Greek) Republic symbolism over its door or window moldings, pillars/columns, porticos, and domes :) 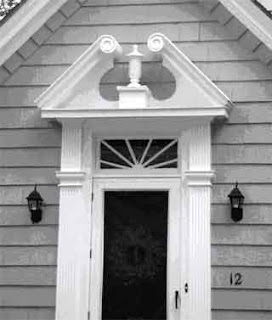 With, of course, any American Eagle molding over doors and windows of course being a dead giveaway it's actually Federal rather than Georgian :) 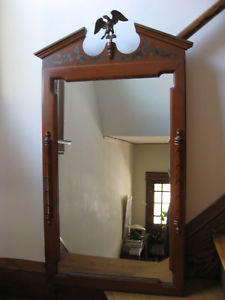 Though Georgian Colonial government buildings were beautiful in their simplicity and symmetry, you can tell nothing about their personalities, who they are as people, their spirit, their beliefs - and certainly, NO EAGLE moldings, anywhere in sight :) 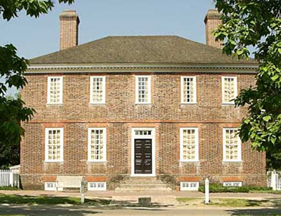 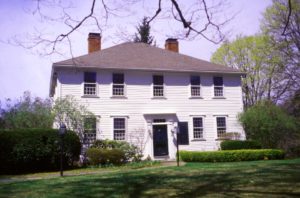 Gradually, you began to see who they truly are - you see  the slow and slight emergence of Federal elements in Georgian homes, rather than just on government buildings:  Rounded dormers, semi-circle windows over doors or atop rectangular windows, or full circular windows, keystones over the windows - with increasing Neoclassical/Republic moldings over the doors and windows, the beginnings of domed or angular neoclassical porticos with Republic friezes or reliefs, Doric columns or pillars.

These homes are still Georgian, but you can see every-so-slight expressions of "turning Federal" along with the country - claiming architectural elements that previously adoring only royal/government buildings as their own, that they belong to the people themselves  :) 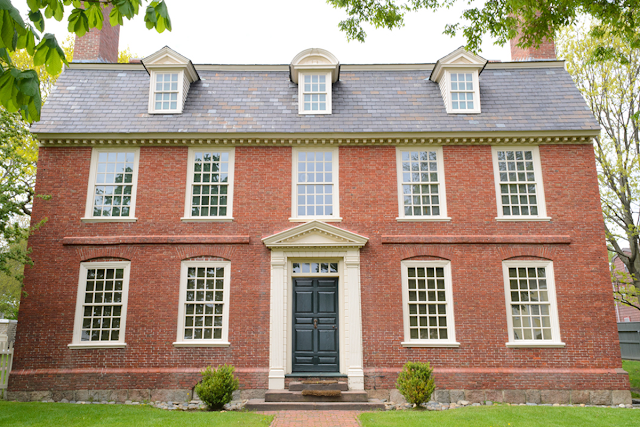 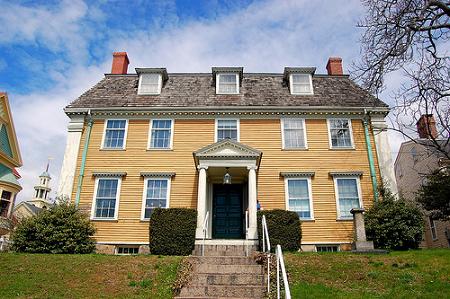 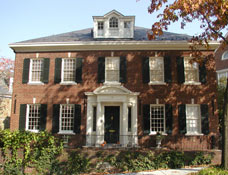 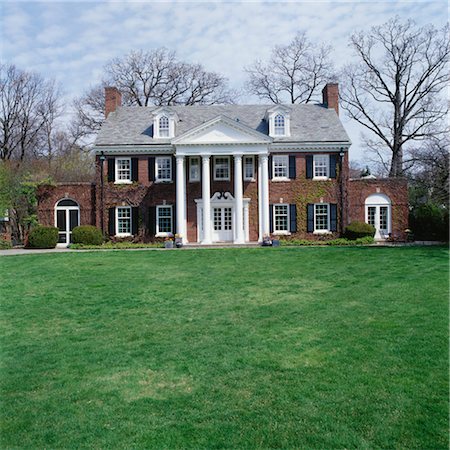 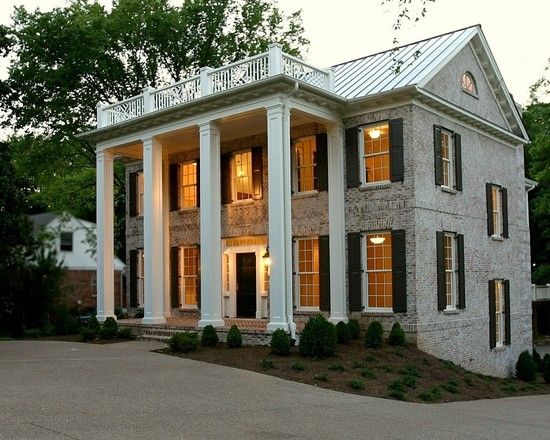 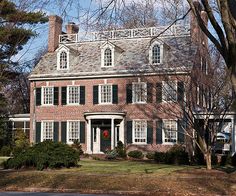 In fact, Thomas Jefferson's home of Monticello is considered epitome of federal architecture, because he chose to design himself and incorporate all elements that previously reserved for royal government colonial buildings into his home - to an exaggerated degree  :) 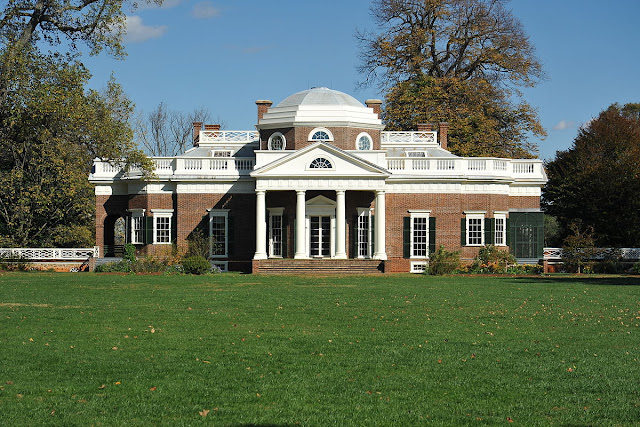 I wonder how many people realize that about Monticello?

Again, oversimplifying, there were basically 2 styles of Dutch Colonial in America, which are unofficially separated into essentially traditional Dutch homes and the more rural cottage style - although especially in the Northeast, the styles became mixed, and often incorporated Federal elements.

So if it's in brick, it's actually a Georgian/Federal mix or brick was placed over the original for stabilization as it aged.  (Good to know for renovations and value;)

The traditional Dutch Colonial is identified by multiple small-paned windows, with straight strips/slats separating them. 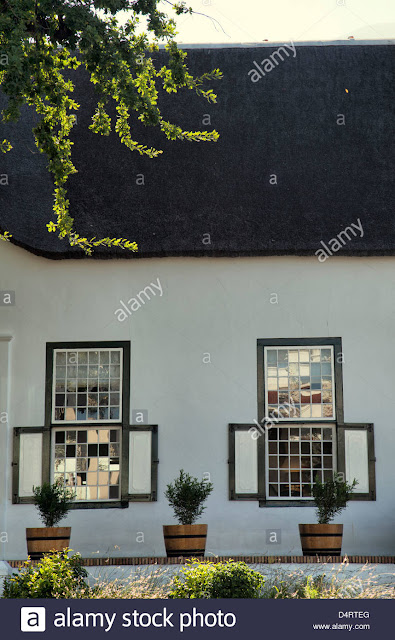 (Sometimes the windows are "halved" by one thick vertical slat in the center, with smaller panes and slats on either side side of it, and it opens left and right, like shutters, or French Doors, rather than raising it up and down.  The windows can be very narrow in width compared to their height.)

The original part of this house (on the left) is true traditional Traditional Dutch Colonial (note that the windows are often tall, but very narrow, width-wise.

The newer half (on the right), though Traditional Dutch Colonial in style, but was obviously built later, in brick, with a portico/fenced porch and the chimneys are visible from the front, reflecting its Federal colonial influence. 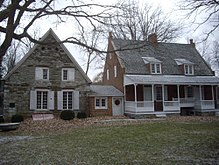 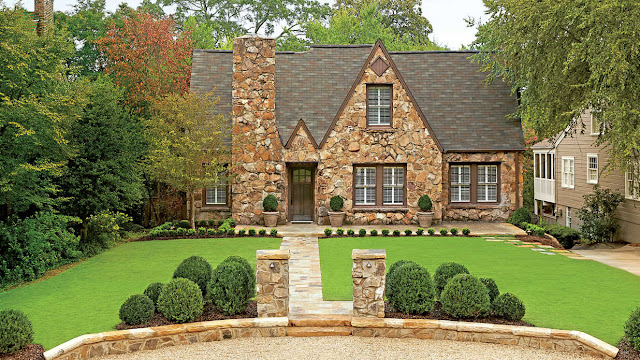 The more rural style Dutch colonial also may have some German Tudor components, but the telltale mark is a barn-shaped roof, and perhaps fence-like structure atop the portico or porches or the roof (like a widow's walk).

Here are the oldest and rural/cottage-style Dutch Colonials (before incorporating Federal Elements). 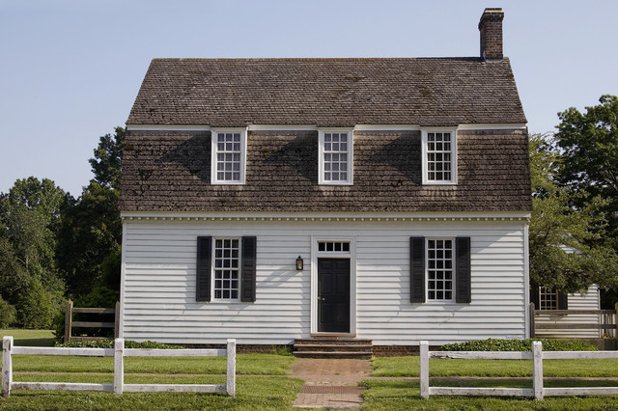 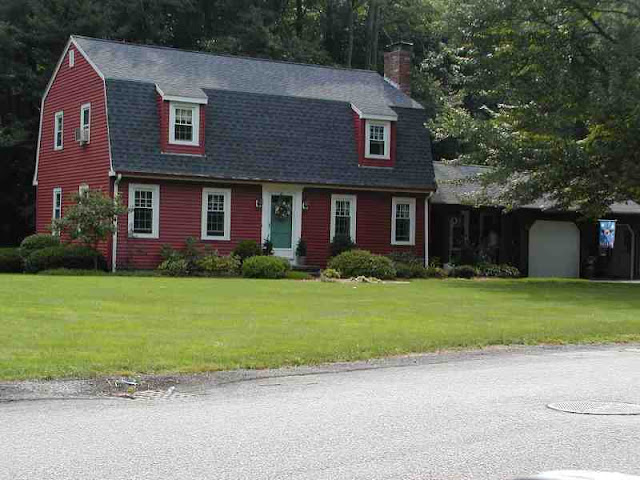 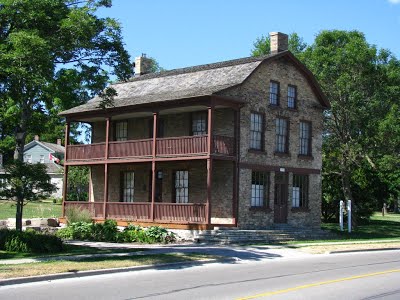 The Dutch Colonial/Federal Colonial mix was extremely popular in the Northeast and over to Pennsylvania, well into the late 1800s, later mixing with Victorian.

But as for the Dutch Colonial Cottages built in the late 1700s/early 1800s,  the more "Republic" Federal elements you see, the more you see evidence of letting go of past persecutions, still maintaining the best of their own culture, incorporating in the new :) 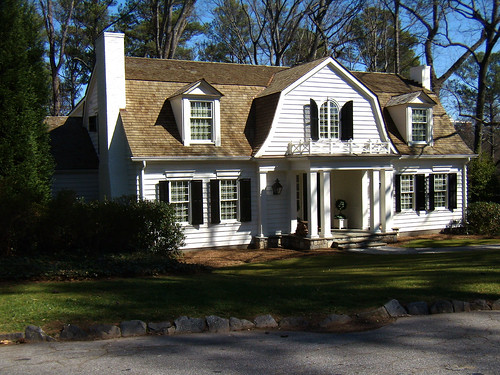 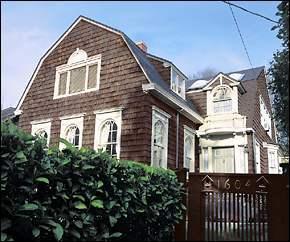 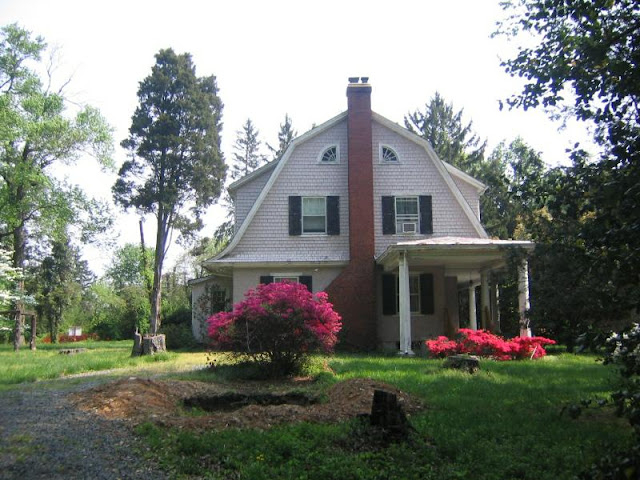 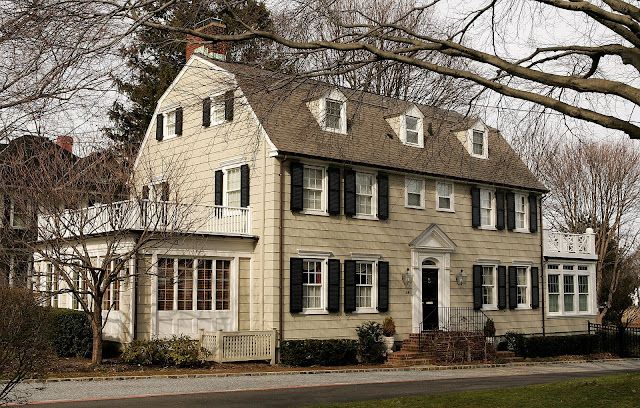 One with German Tudor wood-slats on the outside, but still a Dutch Colonial/Federal Mix ... 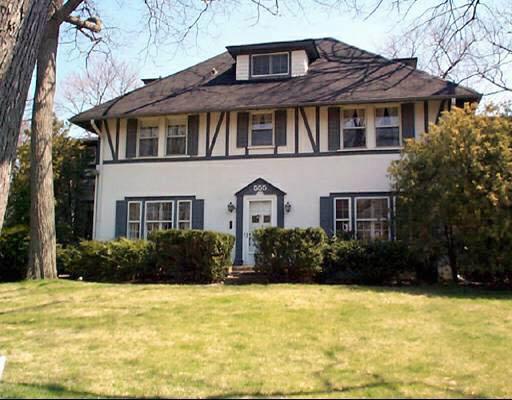 The next three homes are Dutch Colonial/Victorian mixes :) 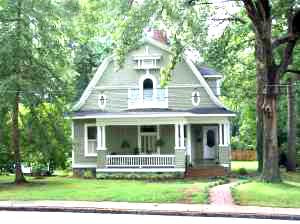 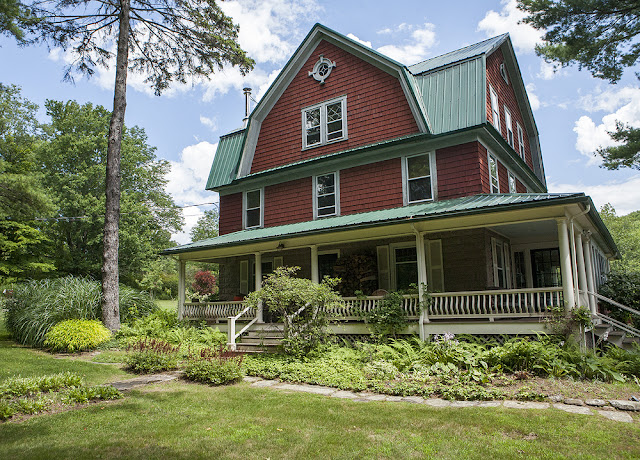 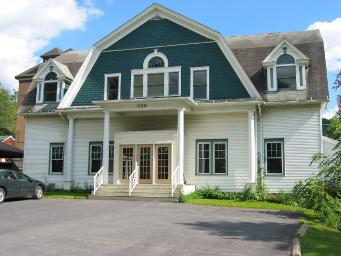 Yeah, me neither, really - it doesn't help that most houses mixed elements.

And still, watching architecture tell your history without ever speaking a word, is pretty cool, yes? :)
By Chrysalis at April 30, 2019