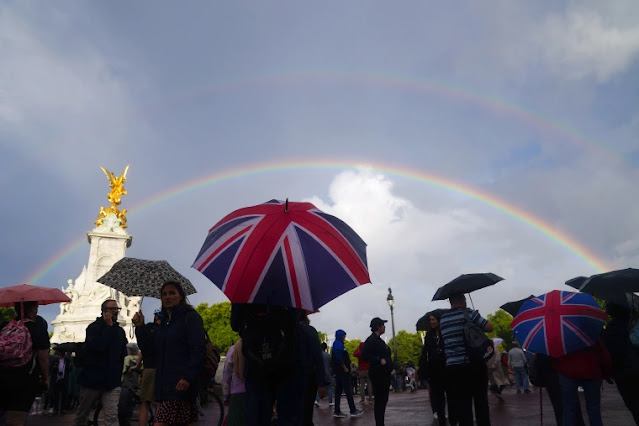 If we could look past our politics or mistakes made, for just a moment, to the woman herself as queen; how remarkably fitting it was that not one, but two rainbows appeared, over Windsor Castle near the time of her death, as people gathered awaiting any news ...

... because whatever else was going on in the world, the world itself often looked to Queen Elizabeth as a shining symbol of hope, stability, and constancy during even the darkest and most chaotic of times, never disappointing them :(

Thank you, Dear Lady ... may you be greeted on the other side first by your beloved Philip :)

PS 9/9/22- Again, let's try to separate the person that was Queen Elizabeth from the "British Empire."

She didn't start it, she's not responsible for any of the things that came before her, including colonization - she's not even responsible for the way things are now (her power being very limited by parliament), with the exception of being an advocate for turning former colonies into a "commonwealth," a positive move - she was merely born into this role and did the best she could.

How likely was she to abolish the entire system?

Not likely - and you know dang well, you wouldn't abolish the monarchy either, if you were born into that role lol.

In fact, she literally can't abolish the monarchy all by herself,  even if she wanted to -  again, policy decisions are now made almost exclusively by parliament.

UK's governmental system is now exactly as it should be, it's very balanced, given its history - monarchy is limited in power by a democratically-elected parliament - which she never once overstepped, mind you.

Think about what an accomplishment that actually is, especially compared to democratically-elected PMs and presidents, who especially in recent years have notoriously overstepped their constitutional bounds.

HOWEVER, the system does need some reform, IMO, some closet cleaning, to include better people in parliament, and above all, to make reparations for damage done, just as we here in America should do.

Could she have done more?

Of course - but it's a rare person who's never laid on their death bed and didn't think "I could've/should've done ______."
It's just most of us don't do, or not do, these things in a fishbowl.
We don't know what her regrets were, but I'm sure she's not a sociopath and did have some because she has lightly touched on them.

Also, that doesn't mean I didn't like Diana, I liked her very much, too, for different reasons - because again, we do not always have to pick sides, empathy can go both ways.

Two very different women, both with admirable qualities as well as quirks and flaws.

The Queen learned from Diana, even if inadvertently, and it's very sad and unfortunate that it took Diana's life to do it.

Thus, I suspect having regrets, she began to modernize and allow human emotion to sometimes be shown - which is something Philip himself had pushed for earlier on, to pull the curtain back from some of the mystique to reveal at least some humanity (although I wish more had been done to curb the paparazzi)

Along these lines about what the Queen did and didn't know, I think the Queen herself has hinted previously - long before Diana - that she was too shielded by members of the business that is the Royal family (as opposed to the actual Royal family) from many things - not so much to keep her ignorant, but to keep her distanced from certain unpleasantries, because if she doesn't know, she's not responsible  - shielded much more than the Queen herself would've liked.

That is not to say she was always innocent or never made mistakes, she is still, of course, human - but  IMO, she did try to educate herself on as many things as she could, while her staff tried their best to make sure she didn't and tried to distance her.

Regardless, I'd like to see a person criticizing Queen Elizabeth at her death - who not only clearly has no regard or empathy for her, but also has none for those around them, grieving - do a better job on their best day.

I mean, it's like you're standing up at a funeral and shouting everything you didn't like about a person - you just don't do it, if for nothing else, out of respect for the people around you, because it's not all about you and your opinion, right?

Y'all can't even hold your tongue (or fingers) for a single day, even a single second - try a lifetime of having to, as she did!

(Clearly, I'd never make it, myself lol.)

Sorry, but I for one am choosing to focus on the positive rather than speak ill of the dead, and I genuinely have much respect for her.
For those of you who can't even wait a day to criticize her, sometimes very nastily, you've already proven your unwarranted arrogance and sanctimony, as well as that you have no empathy, no ability to give others the same benefit of the doubt that you expect for yourself, and that you have nothing positive to say about anyone, anyway.
Thus, the rest of us will try to be more like the Queen and just ignore you/your apparent lack of impulse control :)