So My Neighbor's Son is Playing Running Back for the University of Virginia, Right Now - As A Freshman!

I've believe I've mentioned on here before how awesome my downstairs neighbor and his sons are before, on here, but now, his oldest son is becoming a superstar - this is the Cavs second game and the second time he was put in as running back for the University of Virginia Cavaliers (against Syracuse) -  as a freshman.

The TV game commentators just described him as having "electricity!"

Not only is he a great running-back, but he's super smart - UV ranks #25 in the US in academics, making it one of the most competitive universities in the country - and if you think it's easy to get in just because you're good at football, think again - you've got to have the GPA and college-entrance scores, too.

Aw, I saw this young man headed out in his tux with his beautiful prom date, last May.  And I bake cookies for L and all three of his sons every Christmas.  Growing up fast  :) 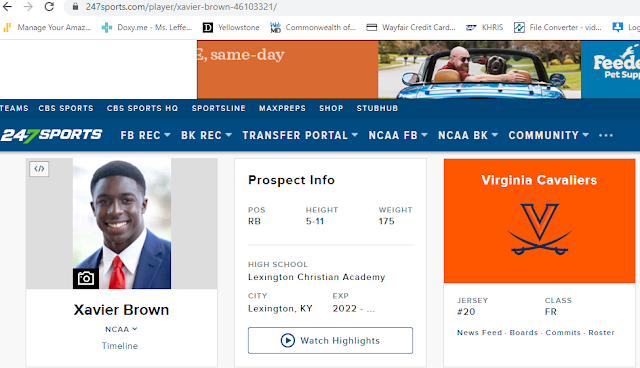 PS - Watch also for his little brother, Evan, still in high school, but also headed for superstardom (but more likely basketball or baseball, both young men excel at all three sports) -  and who also does a great job of watering my flowers when we're on vacay! lol

Older Post Home
**PLEASE NOTE** - I use no other social media and my comments are closed due to persistent harassment and impersonation by one individual - sorry :(