Why The Impeachment Motion Has Begun (And Probably Won't Matter :/)

I'm not sure people are getting how serious and blatant Trump's infraction is - perhaps because we are all so desensitized to the other morally reprehensible things he's said or done, or perhaps because his supporters have let him go without sanction on everything else - either way, it's clear that he now believes he is above reproach. Is he?

First of all let's recall that he denied colluding with Russia or having anything to do with his son meeting with Russian officials to investigate/gather dirt on Hillary, which they "freely offered."

Now, he just openly admitted (see above video) that he asked the help of Ukrainian President, Volodymyr Zelensky, to "investigate" Joe Biden and his son (but denies the allegation that he withheld congress-approved US military aid before he asked).
An anonymous whistleblower says he did - we're just not sure if that aspect happened in advance of that phone call, when or if it happened. WH has promised to release the call itself, but that does NOT mean the funding withhold didn't happen if not mentioned on this particular call itself.

Even if Trump told the truth (Ha!) and didn't withhold military aid - he admitted asking the Ukrainian government to investigate/find dirt on Biden as 2020 election opponent - which in and of itself is blatantly unconstitutional - in that it abuses executive power for personal and political gain, and circumvents the consent of the governed, congress and We The People.

Because you did it once and got away with it and will do it again - because your supporters didn't care that you did - and believe you can do anything and not lose support.


Just like he joked during his election, "I could shoot someone on 5th Avenue and not lose voters."

Yes, it was a joke - about something he really felt was true - is it true, America?


Trump could do anything and not lose support with you?

What has he really done for you?

What has any president really done for you personally that you would look the other way to this degree on?

Ask yourself this question: What if Obama or Hillary had done this and actually admitted it - especially if/when they were POTUS?

This is blatant criminal behavior and unprecedented abuse of executive-branch power, unconstitutional, and criminal, America - we cannot let this go.

Even if you're a Trump supporter, think about future presidents - we must set a precedent for what we allow from presidents and presidential candidates in the future.

It also undermines further the level of respect for the Office of the President of the United States.

So if you refuse to impeach him, at least disallow his candidacy bid for 2020.

Please stop allowing your moral compass, conscience, and soul to be prostituted over politics.

So I went to WH-controlled Fox News to see what their reaction was. I rarely go there because the publish opinion/speculation as fact and write on a third-grade level.

It's both hilarious and scary that people can't see the blatant unconstitutionality and socialist/communist tactics being used right in front of their faces, just because Trump wears the right party hat lol. 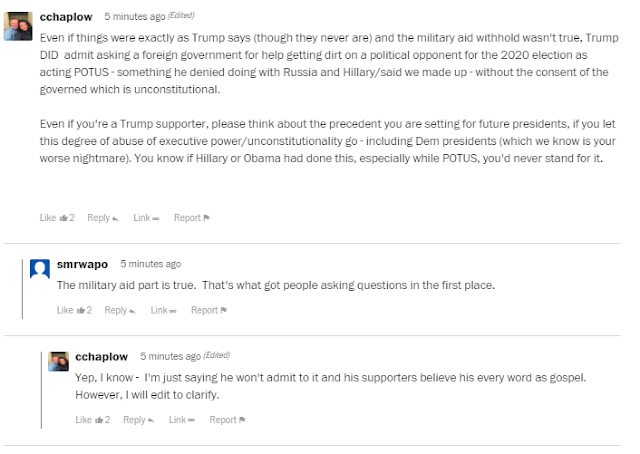