For those who haven't heard yet, The Cars front man, Ric Ocasek was found dead at 75 (I had no idea he was that old), by his wife, one of the first original 80s Supermodels, Paulina, Porizchova (54). 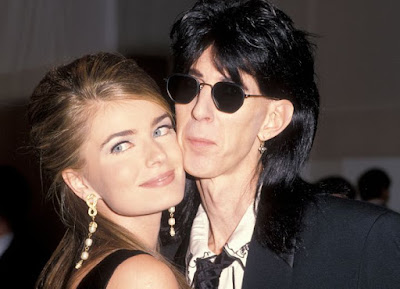 I wish people born after 1990 knew how big this couple was in the 80s, and much The Cars were a part of the soundtrack to our entire  teenage-hood in the 80s.

Every guy wanted to be him and every girl wanted to be her and live what we imagined was their fabulous, rock-n-roll/supermodel life :)

They met on the set of The Cars video, "Drive" (Heartbeat City, 1984) - although Benjamin Orr is singing lead on this one ...


They were married for 28 years - which is a record for rock stars and supermodels - and had 2 sons, but just recently legally separated in 2018 - supposedly amicably.

First there were THE original SI swimsuit 80s supermodels - Cheryl Tiegs, Christie Brinkley, and Carol Alt. Then Kim Alexis, Paulina, and Iman.  Then Cindy Crawford, Linda Evangelista, Christy Turlington and Naomi Campbell, then Elle McPherson and Claudia Schiffer and, well, you know the rest since.

Supermodels aren't quite the big deal now as they were in the 80s, though lol.  If you didn't know your supermodels, you were  "like, a MAJOR geek, totally" lol.

(I find this hilarious, now, considering my icons have clearly changed significantly since my teenage years lol.)

They were the original fashionistas - today, you might even call them the original "Super Influencers," , too :)

Supposedly, Paulina and Iman were considered  the most intelligent of the SI girls.

In fact, unlike Melania Trump, Paulina was not only legitimately a supermodel (Sports Illustrated cover multiple times) - but she really does speak 5 languages - fluently. In fact, there's a rumor that Melania cannot actually speak 5 languages fluently, and that Trump's PR people "borrowed" Paulina's actual history to puff Melania's image - to include the struggles of growing up in initially a communist country when young (Paulina is from Czechoslovakia, rather than Slovenia).

Except when Paulina was discovered, she moved to live with her grandmother in Sweden and the Swedish government battled the Czech government for her parents to be allowed to leave to accompany her on modeling stints - but lost.

Regardless, fitting the 2 most iconic/intelligent supermodels, Paulina and Iman,  would marry 80s rock icons, isn't it? 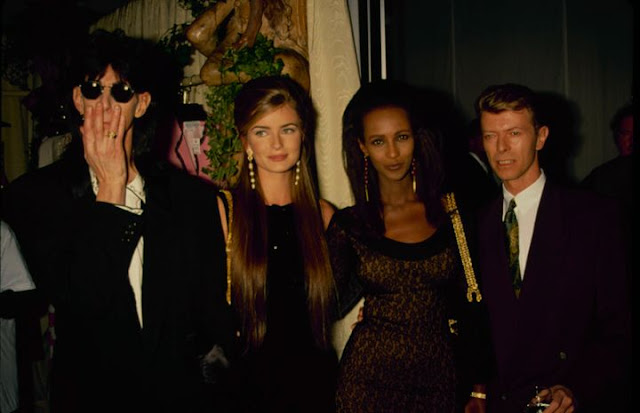 In fact, Sports Illustrated asked her to pose in a swimsuit again for their June 2019 issue, at age 54 - and she did it - to prove women can be sexy at any age :) 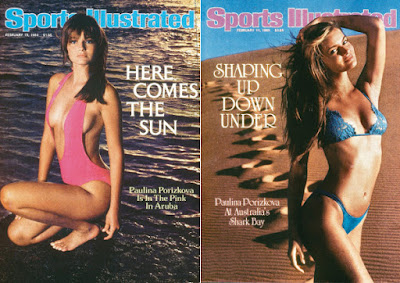 Ladies, OF  COURSE it's airbrushed and strategically shadowed to cover flaws - but they were back then, too, especially the cover lol.


But note in the actual photo spread, the pics are not airbrushed - supposedly at Paulina's request - so young girls especially can see reality and strive less to be perfect/flawlesss - but simultaneously make her point about how older women can be sexy, despite flaws.


And still, you know dang well we never rocked a bikini like that, at age 20 OR 54 - even if we were airbrushed and had plastic surgery lol.
And admit it, Ladies - you know you wore all the department-store and "The Limited" mall knock-off versions of everything that she and the other supermodels wore, back then, despite dissing them out of jealousy, now, tell the truth lol. 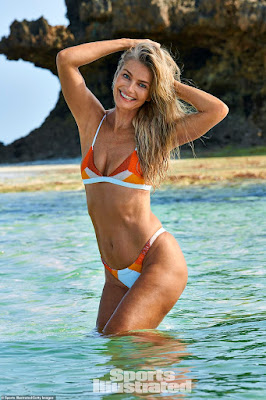 My favorite Cars song is still one of their first, before they semi-sold out mainstream, and were better known for guitars than electronic keyboards (sorry, it's true) although Ben Orr is singing lead on this one, too (also deceased, pancreatic cancer in 2000) ... "Just What I Needed" ... (The Cars, 1978)

Apparently, Paulina posted this pic to Instagram of fans leaving flowers outside the townhouse they once share together, with just two words: "Thank You"  ... :( 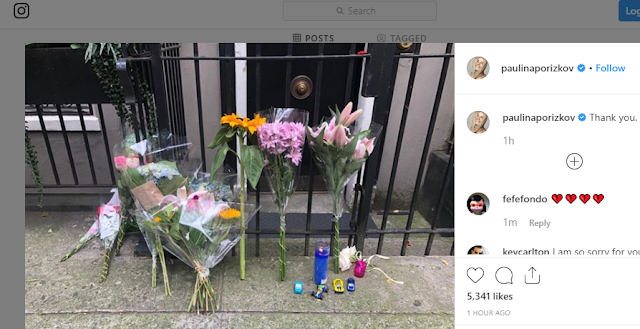 Thank you for the fun-side to the soundtrack of my teenage years :) 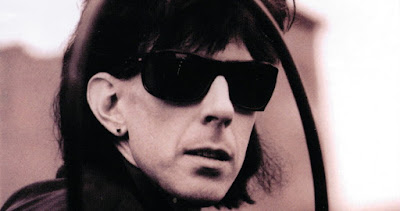 PS - Texts between myself and a childhood friend (since age 6) regarding Ric Ocasek.

Suddenly, we were 16 years old again.

J-Lynn: I just now saw that!

Me: Who's gonna drive us home, tonight???

Prince, Tom Petty, Ric ... someone must stay with Bono at all times now.
J-Lynn: Seriously, if Bono goes, I will know it's all over.

Me: Dang straight. We've had plenty of practice as caretakers.

J-Lynn: Right? We would be the best ever!

Rest in peace, Ric - thanks for providing the soundtrack (along with others) to our teenage years.

PPS - It's a shame people have to post their last, private moments with someone to social media to end wild speculation.

But these days, when no cause of death is immediately reported, people automatically blame the still-living partner -  especially if a woman.

And unfortunately, these days, what people don't know, they make up - if someone has a random, wild speculation pop into their heads, they state it as fact, and that's enough to make it real.

No, it isn't - proof should still be required before stating something is a fact.

Not that thing said or done that could be interpreted 12 ways and debated about/decided upon in a fair court of law (which apparently is becoming a thing of the past as well) - but irrefutable proof) before you state something is a fact instead of your opinion?

Yes, Ric and Paulina have been separated for 2 years, after 28 years of marriage - that is a proven, legal fact.

However, that does NOT automatically mean there was animosity, and both have stated it was amicable and they were still the best of friends.

In fact Paulina, and their 2 sons, Jonathan and Oliver, were staying with Ric to care for him after cardiac surgery.

And by the way, she had her own money - hello, she was a supermodel (and author)?

We need to step out of the dark ages and Salem witch hunt days and step into the light and enlightenment.

Let's all stop automatically blaming other people for an individual's very real physical health issues or mental health issues/suicide - as well as learn how to distinguish between fact and opinion again.

Sure, stress can exacerbate such issues - but no one is to blame.

Addressing people's wild speculation via social media should be the last thing grieving people should be worried about, right now.

Paulina gave a brief synopsis of what happened, then asked to respect their privacy while mourning 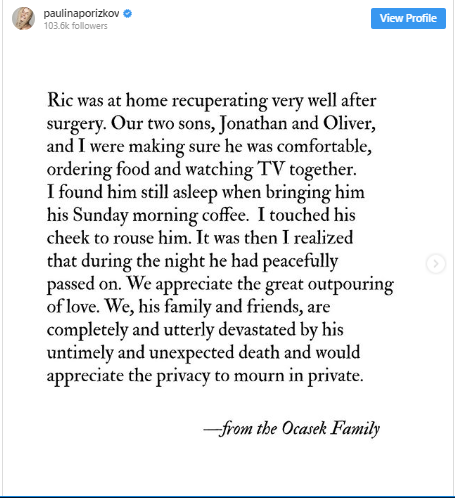 With their sons, Jonathan and Oliver,  posting to The Cars social media account this last "doodle" from their father, found on his armchair, on the day he died ... 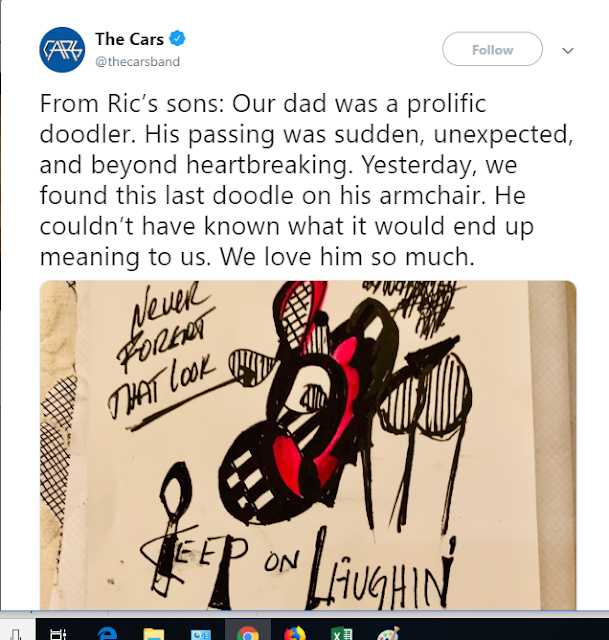