Upon texting a friend, I updated her on something, then ended it with, "In other news, we have blatant racist in the White House.  That is all.  What's going on there?"

This reference to my great-great grandfather, who apparently said that regularly in the 1920s and 1930s under different circumstances,  always makes him laugh.

Apparently, my great-grandmother, known to many simply as "Mama Mann," (as their last name was "Mann") used to feed people in soup lines off her back porch during the depression, as well as host her Baptist Women's Circle meetings in her home, serving finger sandwiches.

Every week, my great-great grandfather - who was disabled in the civil war (and generally a PIA for my great-grandmother to care for), would dress up in his Confederate Army uniform (sigh, I know), and come down the stairs so the ladies would fuss over him, much to the dismay of my great-grandmother, who was pro-Union Army.

And yet she still cared for his ignorant, racist butt anyway because he was disabled and she felt it her Christian and wifely duty to care for her father-in-law.

That was Kentucky - you had a choice to fight for Union or Confederate, you see - sometimes brother against brother.

Most of my family fought Union, but there were some straggler Confederate idiots in my family, too - and my grandmother said my great-great grandfather Mann was Confederate, but we're not sure - that's still being researched.  What is certain is that he was sometimes difficult with Mama Mann.

My great-great grandfather would promptly eat all the finger sandwiches for himself, then proclaim loudly throughout the Christian Women's Group, "Hey, ho ... what's the world coming to, when a man can't get a sandwich in a room full of women?" ... Several times, disturbing the meeting until somebody paid attention to him again.

After about the 5th loud exclamation, Mama Mann paid attention to him, all right.

Mama Mann was the most compassionate soul in the world, but she could get tough when she needed to.

Her daughter, my grandmother was also very compassionate, but wouldn't say "Boo" to a fly.

Apparently, I take more after my great grandmother, lol. 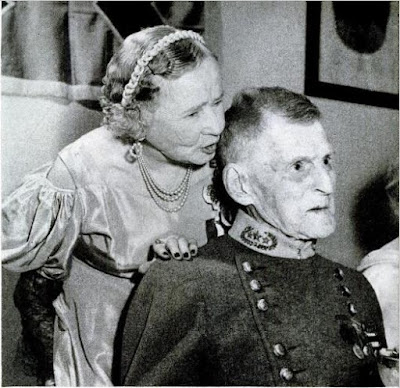 (No, this is not an actual pic of my great-grandmother and great-great grandfather.)


"Now, Mr. Mann, you know you very well you already ate nearly all those finger sandwiches that were for my Ladies' Circle meeting yourself, and you oughn't have, because of your sugar diabetes. So you just sit over there quietly and behave yourself until my circle meeting is over, and then if you're still hungry, I'll fix you something else."

"And if you CAN'T behave yourself, you may go sit out on the porch swing all by yourself. Hush up, now, it's our lady guests' turn to eat and speak. "

And sometimes, he found himself out on the porch swing, let me just tell you THAT, right now.

Still exclaiming "Hey, hohhhhhh..."...  until she shut the front door on him lol.

In other words, though just 1 hour a week, when my homemaker great-grandmother had her women's church meeting, that was apparently "taboo" according to Confederate white men, who wanted women to be waiting on them every hour of every day, dang everybody else.

It's interesting that the world has changed - and yet Confederate-style white men haven't changed a bit, isn't it?

Now there's something I bet Trump men haven't thought about - just who do you think is going to take care of you, when you get old?

Women will, that's who - whether at home or in retirement or private-pay healthcare facilities (which are predominantly staff by women) :)

That's if you're lucky and behave yourselves - lest you might find someone has dumped your ignorant, belligerent, racist, misogynistic butts in the state nursing home ;)
By Chrysalis at July 18, 2019