James Fields, The Neo-Nazi Just Life Sentenced For Killing Heather Heyer, After Intentionally Driving His Car Into Protesters in Charlottesville - Went to High School With My Daughter 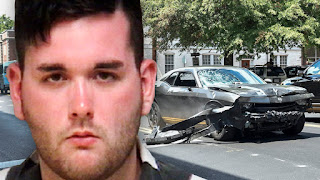 I don't talk about my daughter much online for security reasons (prior experience).  However, James Fields, the Neo Nazi just life sentenced for killing Heather Heyer, after driving his car into Anti-White-Supremacy protestors at Charlottesville's "Unite the Right" rally - went to high school with my daughter in Northern Kentucky (we lived there from 2007-2012).  No - they were NOT friends.

I'd like to say he was a loner freak, but unfortunately, he's not alone in his beliefs - here in Kentucky, especially.

However, by many accounts (including my daughter), he was an angry, creepy, racist, little pr**k, who clearly only got worse after high school.

However, teachers were oblivious.

One teacher even said he was "surprised" by James' actions, but knew he was a Neo-Nazi.

Let me get this straight - you knew he was a Neo Nazi back in high school - and you're surprised by his violence now?


What, are we up to like 8 white-male, US-citizen, domestic terrorists, now, just since Trump was elected?

(Let's not even do a total count because again, the stats on the majority of domestic terrorists and mass shooters actually being US-citizen white males would only strengthen my point ;)

Oh, there are none so self-deluded and willfully blind as the modern-day political right.

Regardless, Fields just got what he deserved - he was sentenced to life in prison :)

And let's not forget the history of violence from White Supremacists and Neo Nazis, although they would like us to forget, and pretend along with them that only immigrants and people of color commit violent crime (and pretend leftist REactions to their BS exist in a vacuum) ;).

And no, Trump - both sides were NOT at fault, like you said - ya white-trash, White-Supremacy Tool.
By Chrysalis at July 01, 2019