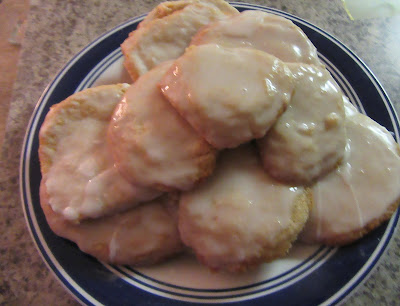 So, I made these pumpkin spice sugar cookies the other day, using this recipe I found online (sorry about pic quality, just snapped a quick pic on the way out the other day) ... 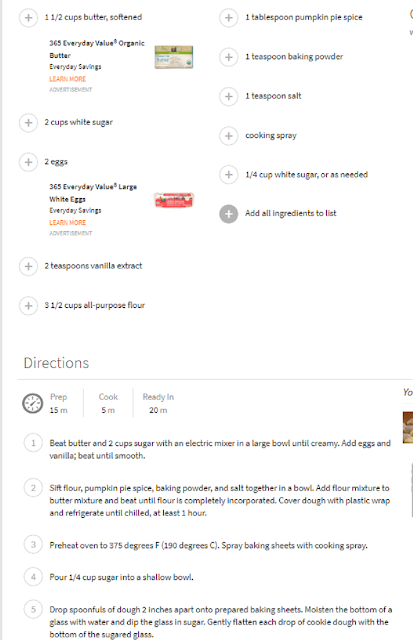 They are SO good and everyone loved them so much, I may make them again and give them out on Halloween along with candy!

Thank you "Big C" recipe lady at All Recipes! lol.

After watching Halloween Wars and Halloween Baking Championship on The Food Network, though we don't have time to decorate as we'd like, Mark decided he wanted to bake something, and I wondered if we could  try to make a pumpkin-spice/sugar cookie mix.

Just one problem - Mark doesn't cook or bake at all, and though  I'm a fairly good cook, I'm a terrible baker lol.

Well, I mean, I'm fairly artistic/creative on the decorating part (when I have time), but the actual recipes themselves require more precision - you can't be as creative, and just add a little of this or that, during the process, like regular cooking or writing or artwork, instead you have to use exact measurements and be precise until it's baked, then taste it to see if you like it, then decide what  it needs next time.

Plus I've never had much of sweet tooth - cakes and pies are usually too rich for me (these cookies even pushed it).  Not a big fan of cakes or pies - soft drinks, ice cream or cookies, and maybe a little chocolate when I'm hormonal is the extent of my sweet tooth - everything else is too rich sugar wise?

So, I thought about winging it, but was a-feared lol - so we went looking to see if there was an existing, tried-and-true recipe and found THIS - and it was so easy, but SO good - turned out exactly as she said, half pumpkin pie, half sugar cookie, perfect combination of soft chewy and crisp!

I did add my own little glaze to it which set it off - confectioner's sugar, milk, drop of lemon extract - but make sure to keep it thin, they're already very rich.

PS - I can see certain individuals have hit my blog site several times, while I was away (comments are closed, mind you, due to persistent harassment by a certain individual) - perhaps hoping I'll be drawn into the civil war they're just chomping at the bit to have?

FYI - I haven't been to anyone's social media since early Saturday and I'm not going to - because I. Don't. Care lol.

As I said, you may have your little civil war, based on lies and distortions - without me, thanks :)


However, Republicans, I will be glad to share these cookies with you, too - IF - you finally remember how to do the right thing (for America and in general) and GROW. A. PAIR!

Geez, what a bunch of wusses the GOP is today.


No need for we of the left to "p----fy" you with Gillette commercials (*snicker*), you all willingly emasculate yourselves with fear of standing up to Trump lol.

Dang - once upon a time, in this country, we had men and women who were willing to be ordered to their deaths for standing up against tyranny and for our constitution and this country - but you wusses in the GOP today are afraid of what Trump might say about you on his Twitter page?

Regardless of how this impeachment thing turns out, in the long run, he'll go down in history as an unconstitutional traitor, tyrant bully and criminal, and you'll be remembered and cowards and traitor sympathizers - or brave, true patriots, for standing up against the bully - what's it going to be?

You're so short-sighted - how would you prefer to go down in the annals of history versus Trump's Twitter page today?

You were supposedly all about "conservative," strict interpretation and adherence to the constitution during Obama's administration ...

... now you don't care if our president ignores the supreme law of the land that is our constitution and openly asks foreign governments to meddle in our elections?

Any illegal, immoral, dishonest, deceitful thing is okay with you - just so long as the white, straight, supposedly "Christian," anti-abortion male wins - is that about right?

Oh, "patriots and Christians" my arse, GOP - the fact that you only care about the supreme law of the land that is our constitution when it's a Democrat in office proves that you are nothing more than political prostitutes for hire.

At least Mitt Romney and Colin Powell had the cajones to put their country first, go Mitt and Colin!

(Btw, Trump, not everything is about winning and dominating - some things are more important. Mitt clearly has more character and cajones than you and refused to stoop as low as you do, to win - and good on him for not doing so, when he could have.)

Like I said, my plan is to hibernate until this impeachment thing has been decided one way or the other, because Trumpers and believing their own lies remind me of a bunch of 10-year-old girls at a slumber party, scaring themselves with ghost stories they just made up themselves.

If that's the case, and these are my choices - Trumpers and their crazy, proofless conspiracy theories VS. preteen slumber-party ghost stories - I choose preteen ghost stories and spooky movies - because even the bad ones on SyFy make more sense and are definitely more fun than Trumpers lol.

It's just as relevant today as it was in 1992, perhaps even more so - I genuflect to the master of passionate political tirades - put your hands together for the master, Julia "The Terminator" Sugarbaker :)

JULIA: (irritated) "No, Mr. Brickett. I have not forgotten. I was just thinking that you seem to have forgotten the phrase 'Separation of church and state,' but the one thing I did forget was just how divisive, dishonest, and distasteful someone like you can be. I've sat here today and listened to you pander to these people, but you don't actually care about them, or you wouldn't be sitting here reinforcing their ignorance and prejudices."
BRICKETT: "You heard that, Caller. She just called you ignorant and prejudiced!"

JULIA: (angrily) "I do not think everyone in America is ignorant! Far from it! But we are today, probably, the most uneducated, under-read, and illiterate nation in the western hemisphere. Which makes it all the more puzzling to me why the biggest question on your small mind is whether or not little Johnny is gonna recite the Pledge of Allegiance every morning!"

"I'll tell you something else, Mr. Brickett - I have had it up to here with you and your phony issues and your Yanky Doodle yakking!"

"If you like reciting the Pledge of Allegiance everyday then I think you should do it! In the car! In the shower! Wherever the mood strikes you! But don't try to tell me when or where I have to say or do or salute anything, because I am an American too, and that is what being an American is all about!"

"And another thing - I am sick and tired of being made to feel that if I am not a member of a little family with 2.4 children who goes just to Jerry Fallwell's church and puts their hands over their hearts every morning that I am unreligious, unpatriotic, and un-American!!"

"Because I've got news for you, Mr. Brickett - all liberals are not kooks, anymore than all conservatives are fascists!"

"And the last time I checked, God was neither a Democratic nor a Republican!"

"And just for your information, yes I am a liberal - but I am also a Christian. And I get down, on my knees, and pray - everyday. On my own turf, on my own time."

"One of the things that I pray for, Mr. Brickett, is that people with power will get good sense, and that people with good sense will get power - and that the rest of us will be blessed with the patience and the strength to survive the people like you in the meantime!!"